The rush to church at Christmas

Having spent his ministry in Lincolnshire parishes, Neil Russell shares a few thoughts why the swollen congregations at Christmas soon fade away. 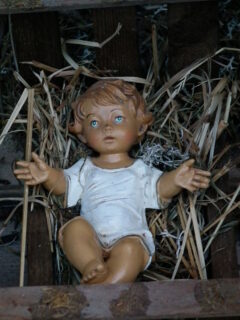 Christmas should lead us into the very heart of the Christian faith. We clergy get quite excited at the number of people attending our services and see those people as seekers after the truth. We live in hope that at least some of them will become regular Sunday worshippers, but once work and the daily routine resume, and the decorations are put back in the attic, church once again becomes irrelevant to the majority of those worshippers.

I have sympathy with occasional churchgoers because once the crib is dismantled and the congregation reverts to the faithful few, there is little to which they can relate. I was ordained as a priest 32 years ago, so I have been a part of this annual ritual for a long time. I have studied the Christmas stories in the bible in the light of the rest of the bible, both the old and new testaments, as well last the writings of liberal and progressive theologians, among them John Robinson, Don Cupit, David Jenkins (former Bishop of Durham), Karen Armstrong, Bishop John Spong and Marcus Borg.

The creeds and doctrines of the Church have not evolved to make sense of the life we lead in the 21st century. Technology and education allow us to see and understand our world in a way that was beyond the dreams of the biblical writers and their early readers. The world was not created in 7 days, but evolved over millions of years, and the God we claim as creator is not a supernatural being but can be described as 'the ground of all being'. Although, for me, Jesus is the way to God, there are other paths to God trodden by those of other faiths, and we should be able to worship and talk together. Jesus had two earthly parents and was fully human and he is, and always has been, my inspiration and my guide.

My faith is nurtured and grows within a community of Christians, now, as it has been throughout my life. My experience of those varied communities is that within them many people have the same doubts as me and want to find a faith which is meaningful to them.

St John said that God is love and where love is, God will be found.I was privileged to train 5 curates in the final 15 years of my active ministry. The first thing I did when they came to the parish was to give them a copy of the church electoral roll (300 members), indicating those I considered needed, or would appreciate a visit, and then to familiarise themselves with as many others as possible on the roll. My reason for this is that pastoral work is the beating heart of ministry and evangelism. Run as many courses as you like, but know and love your community and God, who is love and the ground of all being, will become a reality. All of those curates became excellent priests with pastoral hearts

I would like to end with some words of John Shelby Spong (A new Christianity for a new world): '....Christianity becomes not something to be believed but a faith into which we must live, a vision that stands before us, inviting us to enter. I proclaim a God beyond creeds, a Christ beyond incarnation, a way of life that dares us to grasp the insecurities of our being and move beyond the boxes created by the security-producing churches of yesterday. To be ready to move into this not fully clear vision is to face honestly the recognition that that place where the church, with its binding creeds and closed scriptures, has traditionally dwelt is no longer a liveable place.'

After ministry in the Lincoln Diocese, Neil is now retired and lives in Teesdale