The Parable of the Walled Garden

PCN member Harry Houldsworth finds that the retelling of joke heard many years ago provides a interesting lesson about the nature of Scriptural truth. 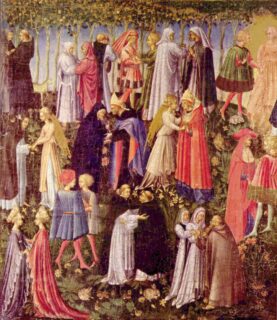 About twenty-five years ago, there was an in-joke being told among senior members of the Anglican clergy in Nottingham. The joke was told to me by a friend who was training to enter the Ministry.

David died and went to heaven, where he was met by St Peter and given a guided tour. On the tour they passed a walled garden. Being a builder, David stopped to admire the brickwork, but his attention was drawn to singing heard coming from within the garden. St Peter nodded. “They are Charismatics.” He paused, before whispering: “They think they are the only people here.”

Remember, this was an in-joke among members of clergy. They could have been from any denomination. The punch line, “They think they are the only people here,” would have caused many of them to smile, or even to laugh loudly (even if they were Charismatic Christians).

Like any good parable, this tale has deeper meanings.

First, there is justifiable criticism of many groups who think they know better than others how God wants to be worshipped.

Second, there is the hint that not all members of the Church of England approved of Charismatic forms of worship. Maybe the High Church clergy once thought that Charismatic worship was not really the “done thing”? Have things changed?

However, the joke confirms a view that Charismatics are welcomed in heaven.

But also, my telling of the joke says a great deal about how parts of the Holy Bible came into being. In some cases, things were only written down after hundreds of years of orators passing on religious stories. With the earliest gospels, the stories were passed on by word of mouth for thirty years or more, before being fully written up and copied by scribes.

As I said, I heard this joke of the Walled Garden about twenty-five years ago. I have thought about it many times. But, if I am absolutely honest, there are certain details that I include now that may not be exactly the same as when the joke was told to me.

I can’t remember the name of the person who had died and went to heaven. I have called him “David”. I did think of saying that he was a Welshman to add extra interest and make David more believable. But then I thought that somebody might think I was being racist, so I dropped the idea. But the point is that had I thought that everyone would have smiled at his Welsh-ness, I might have included something like it in the tale. This was the reason I said he was a builder - to make David more believable: somebody with a mind of his own who might want to look at brickwork, as well as listen to songs of praise.

I’m not sure now that it was St Peter who was leading David on a tour of heaven. It could have been some lesser saint. But then, everyone knows St Peter, and if he is prepared to take on the job, it must be important. And you will take more notice of what St Peter says than you will of the hired help.

It is difficult to remember the exact words of the tour guide, or how he said them. I imagine him pausing in mid-sentence and whispering the last line, to make it clear that he didn’t want to be overheard by others in the area.

The walled garden was in the original joke. That is a fact. It was very memorable.

However, now, I can’t be sure whether I was told that they were “Charismatic” Christians in the garden or “Evangelists” who were singing loudly. And were they singing? Come to think of it, they might not have been singing; they could have been shouting, “Jesus, we love you!” and repeating similar things in a loud voice.

But there is no doubt that the punch line was, “They think they are the only people here.” That was memorable, and it doesn’t really matter if it wasn’t St Peter who actually said it. The words sum up the attitude of those in the walled garden. And the words make people in the know smile, or better still, laugh loudly.

I’m pretty sure that Angela, who told me the joke, was talking about the senior clergy in Nottingham. Or, was it about senior clergy in the then Diocese of Southwell? I’m not really sure. But these are minor details, of no importance. They don’t alter the underlying lesson from the joke or parable. And then, was it Angela who told me? Maybe it was Christine? No, I’m certain it was Angela.

I am sure you all sympathise with the idea of remembering everything you heard nearly thirty years ago.

The parable of the Walled Garden tells us something about the real difficulties early Christians had in passing on the details of the story of . . . ?

Sorry, I seem to have lost my train of thought.

Perhaps you can remind me what I was talking about.......

So how should the Church treat those who question the Bible?

There is little official recognition by Church leaders that educated people today believe that the Bible contains errors, even if one concedes that every phrase in the Bible may reflect the sincere views of the authors.

One can go further than this. The truth is that the approach to interpreting the Bible that is described in the above Parable of the Walled Garden is frowned upon by the Church of England (Sorry, I cannot speak for other Churches). Reading and meditating on the Bible as the “Word of God” is strongly advocated by the Anglican Church, without any cautionary comments on interpreting the Bible. In addition, a few years ago, the ultimate authority of Church leaders in interpreting the Bible was emphasised in a major Anglican report on “Mission and Ministry”.

My own experience is that any member of the Church of England who asks serious questions about the Bible is expected to keep their opinions to themselves. The Church has no love for people who rock the boat.

Church leaders need to acknowledge that all of us today (including committed church members and members of the clergy) may inevitably ask awkward questions about Christian doctrine (if only from time to time) and be unable to tick all the boxes linked to the Christian Creed.

My own preference would be for all Christians to be taught that while their faith is based upon the Holy Bible, it also needs to stand on the following non-negotiable foundations:

Thus: Christian faith is biblical and it involves a commitment to make Jesus our guide in life. From Jesus, we get our faith, our values, and our ideals. However, only God knows what each of us really believes, and all the Church should ask is that we approach our faith with honesty, integrity and some humility (remembering others have views too). Jesus emphasised the need for love, compassion and forgiveness (and you do not need to be a Christian to believe in these things). The Church provides an invaluable service in bringing people together in a community to develop friendship, Christian fellowship, and trust, and teaches that a Christian life is one of duty and service (it is not simply about self) involving sympathy for others. We live in a very imperfect world and there are personal dangers in living a Christian life; courage and endurance are often required, as is the need to accept risks.

We need to emphasise that most, if not all, of these ingredients aren’t exclusively Christian; other faiths share our values.

The demand for honesty and integrity means that no Christian should be expected keep silent when experiencing difficulties in accepting aspects of orthodox doctrine.

A good starting point for promoting a new Christian Renaissance would be for Church leaders to understand and accept that every church congregation needs to contain a reasonable proportion of people who, privately, are a long way from being orthodox Christians. The clergy need to be aware that if these people aren’t in most congregations, the Church is stagnating. The answer is to promote a genuinely inclusive, non-judgmental form of Christianity where all searchers after truth are welcomed.

I believe that when Jesus took the cup, gave thanks and said, “Do this in remembrance of me,” he didn’t add: “And make sure you exclude everyone who is not baptised or hasn’t completed a Confirmation course!” He meant that all who wish to remember him should do so whenever they gather together: in a house or in a place of worship. There is a lesson in this, but only a modern Church can learn it.

I think that we should stop worrying unduly about having people in church who aren’t fully convinced about the existence of God or that Jesus was or is divine. The important thing is that they are there, listening and learning. Everyone (inclusively) should be encouraged to come to church and the Church should do something revolutionary (something it has never done in the last 1700 years): try to love every person who comes to church, and also to take an interest in their views, by asking for regular feedback.