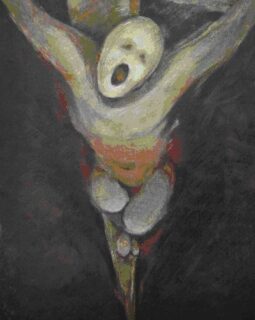 This blog was written after Katharine returned from a retreat in Belfast which explored the work of Peter Rollins. The title of the retreat was taken from Rollins' fifth book, The Idolatry of God: Breaking our Addiction to Certainty and Satisfaction. As Katharine explains, Rollins is influenced by Lacanian psychoanalysis and the work of philosopher Slavoj Žižek.

One of the aims of Pete Rollins’ theology is that of encouraging us not only to identify idols and to acknowledge our intellectual doubts, but to begin to existentially experience something of what Jesus felt on the Cross. When Christ cries, ‘My God! My God! What have you forsaken me?’, doubt, disbelief and even atheism become internal to Christian faith. At the heart of Christianity, there is an embrace of the reality of humanity, of our brokenness and our unknowing.

This move from an intellectual doubt to what Pete calls an ‘existential atheism’ can be seen in the trajectory of his own published works. His first book, How (Not) to Speak of God, is about conceptual idolatry and the status of our theology. It’s about the difference between God and our ways of speaking about God. But this is not merely a point about what philosophers call epistemic humility. It’s an active and knowing ‘unknowing’ that is internal to Christianity. After all, a shared target of both philosophical and biblical figures is idolatry – and idols may be either material or conceptual representations or practices.

But by his fourth book, Insurrection, Pete’s concern with conceptual idolatry and intellectual uncertainty becomes more clearly that of an experiential doubt or existential atheism. He opens by noting how to believe is human. Belief in the idea of a (divine or human) guarantor for meaning and purpose is easy and ‘natural’ for us. But to purge ourselves of the God of philosophy – that conceptual idol – or of the God of what Merold Westphal calls ‘instrumental religion’ – that psychological crutch – in other words, to doubt God – that is hard, that is ‘super-natural’, that is divine. To do that, it takes God. This is why, in Christianity, on the Cross, God doubts God.

Many within the church today intellectually affirm that doubt and disbelief, and perhaps even a divine absence or atheism, are part of Christian faith. And yet Pete turns to psychoanalysis to illustrate how our material social actions can also reveal that it is precisely this espousal of doubt and disbelief that enables us to maintain a way of life that actually disavows these conscious affirmations. Our actions can reveal that belief persists in selected figures (clergy, saints, even Christ himself) and structures (liturgies, prayers, preaching, even the church buildings themselves) that, as Žižek says, are ‘supposed to really believe’ and that, in Pete’s words, ‘believe on our behalf’. These ‘others supposed to believe on our behalf’ thereby protect us from the psychological impact of those potentially transformative times when we experience the absence of the presence of God.

For Žižek, belief can be both subjective and objective, both an inner conviction and something that is externalised. In The Puppet and The Dwarf, he suggests that ‘today, we believe more than ever’. But the form of belief that is ‘characteristic of our times’ is a ‘disavowed/displaced belief’. He explains in The Monstrosity of Christ that ‘the true site’ of belief is not found in conscious acts but in the unconscious – meaning not that belief is ‘deep in me’ but that ‘it is out there, embodied in my practices, rituals, interactions’. Belief is not interior but exterior. We may consciously affirm doubt, but our belief is transferred onto the subject supposed to really believe, so that others, other people, other things, what Jacques Lacan calls ‘the big Other’ – the socio-symbolic network that constitutes reality – believes for us.

It is the ‘fall’ of this proxy, this subject presumed to believe (or know or desire or enjoy), that is the goal of psychoanalysis: the dissolution of transference to the other occurs when the patient accepts the fictional nature of the big Other – that there is no big Other, that there is nothing to consistently sustain the presence and coherence of guaranteed knowledge and meaning, belief, desire or enjoyment.

Žižek turns to Christianity in his own Lacanian philosophy because it is ‘the religion of a God who dies’.

This means that Christianity is a religion that can open up space to think the non-existence of the big Other, the symbolic Order, the Master-Signifier, God, Father, Big Brother, State – that which provides the illusion of certainty and satisfaction. And the Christian narrative suggests that it is in the traumatic crucifixion moment, where surety and security are lost and we feel forsaken and abandoned, that we can experience resurrection, rebirth, and revolution, being turned around and transformed.

Breaking our addiction to certainty and satisfaction is therefore the central theme of Pete’s fifth book. Does an idolatrous addiction to God prevent us from fully participating in the death of God as the big Other? Without full existential participation in the death of God, does belief in the big Other remain, despite any conscious disbelief? And, while we might cognitively affirm doubt and disbelief in our explicit discourse (our everyday theology, God-talk), is there an implicit discourse – found in our material and social existence (the structures of the church) – that believes on our behalf? Therefore, perhaps Christianity is not only the religion of a God who dies, but of a church that must also die?

Another blog by Katharine Sarah Moody, called Death of Church, will appear in a week's time.