Speaking of God in the 21st Century - lecture audio

Australian theologian, Dr Val Webb, speaking on 4th May 2017 at Cairns Church of Scotland, tackles the tension between a Biblical faith and a modern faith. 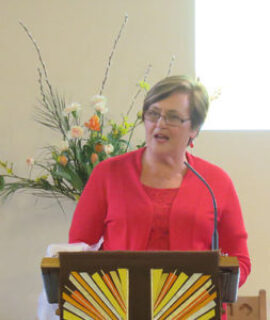 Talking about God must always hold two things together – the story of God; and making sense of that story in our changing cultural, scientific and social understandings....

When slavery was declared cruel and unjust in the nineteenth century, Christians could no longer legitimate slavery with Bible quotes from an ancient world. Since science has demonstrated that heterosexuality and homosexuality are biologically determined and not a choice, we can no longer quote condemnatory Biblical passages from a pre-scientific era. Unfortunately, many ancient doctrines have been kept in place by power and authority, silencing new ideas; and many people have left churches because what they hear has become unbelievable for them. Doctrines based on fourth century Roman culture, medieval cosmology, or Reformation worldviews, must be constantly re-examined to see if they depend on cultural and pre-scientific ideas we reject today. With our expanding knowledge of the universe, it would be strange to insist only on the science of Aristotle or Galileo; and what we say today may also be obsolete next century.

You can link to this talk on the Cairns website.