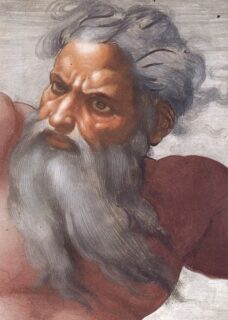 The presentation was well received and the questions lively and thoughtful. Most of them were from people who wanted further clarification of what they saw as a demotion of Jesus. Others were more interested what my perception might be of the future of Christianity. There seemed to be no rancor in the room and plenty of positive feedback and there seemed to be genuine excitement.

I did notice one gentleman in the back of the room who started to raise his hand a couple of times but never held it up long enough for me to call on him. But when I left the podium he headed directly for me. He waited a minute for some of the others to move away and then he moved close and almost in a whisper said: “So what do progressives do about the God thing?”

I thought it was interesting that the entire audience seemed very comfortable redefining Jesus as an enlightened, wisdom teacher as opposed to the traditional role that the church officially collared him with 1600 years ago. But this man felt compelled to ask that question about God in private and then did not feel comfortable to wait around for a meaningful conversation about it.

I suppose I should not be surprised. I remember a woman who was very active in the church I led several years ago. She had come out of the Southern Baptist tradition and had to make lots of adjustments over the years she was part of the congregation. She was there in large part because of our openness to LGBT community in our early years. But she moved along the progressive road with some ease as we deconstructed the traditional Jesus story and redefined his new role. She seemed at ease when we changed the way we did Sunday morning gatherings and even seemed comfortable as we wrote our own liturgies, sang different kinds of music and regularly had great speakers from different faith traditions. But when it hit her one day that I had long ago moved past a “being in the sky” who answered prayers, who guided us personally, who comforted us when we were down, who had expectation about how we should act, believe and think and who ultimately required our worship and adoration…when she realized that I did not believe in that kind of God, our relationship took a major downturn.

According to more recent Pew surveys, in spite of the increasing number of people who classify themselves as non-religious or spiritual but not religious, somewhere close to 90% of our population still say they believe in “God.” However I would guess that if we put 100 people in a room who said they believed in God and asked them to come up with a statement that defined and described this thing they called God, there would be close to 100 different statements and probably some red knuckles when the conversation was over.

I also suspect that even if a group of progressive Christians gathered to discuss the same subject, we would have a hard time agreeing on what we mean by the term God. It would be easier, I presume, for most of us to agree upon what we did not mean. We might be willing to let go, for example, the idea of some anthropomorphic being who may or may not respond to our prayers and supplications. Most of us would probably reject the idea of a supernatural theism that has haunted Western Christianity for over 1600 years. But things might start getting tense when we tried to decide if God is a separate entity or whether we believed in a non-dualistic creation, and “God” is in all things. We might resort to terms like pantheism, panentheism or even something called creatheism, (God is a holy name of Ultimate Reality), but I doubt even in this select group that we could agree on descriptive characteristics of God that would fit everyone’s perspective or anyone’s perspective for that matter. We might wonder if so many of us say we believe in “God,” why is it so difficult for us to agree on what we mean?

The challenge is that we are talking about a supreme Mystery that is virtually too big for most of us to even fathom. Every day, between our space travel, our amazing telescopes (including the Hubble) and the growing understanding of our universe, scientists find new and truly awesome information about our universe and have more questions. What we do know is that there are thousands of solar systems in our Galaxy and the number could be up to a billion solar systems. An average galaxy contains between 100 billion and 1 trillion numbers of stars. Our own Milky Way galaxy seems to contain about 200 billion stars; and that is only an average number of stars according to scientists today. Now picture this…there are virtually billions of Galaxies in our universe.

Scientists tell us now that if you make a circle with your thumb and finger, about the size of a half dollar, and look through it into the sky you are looking at over a billion solar systems, any one of which could support life. Hold on to that thought and then let’s try and move to some description of God. The challenge of course is many of us want some sense of a personal God. But when we talk about a personal God, even for those who truly feel that they have had an experience of something they may want to call God, we are not describing God; we are describing our experience of a Great Mystery.

The point is that none of us can do anything more than describe our own experiences of this Great Mystery that sometimes feels so real to us. To move from our experience to description of what God is or what God wants is just something that we must admit is beyond us. As Dr. Gordon D. Kaufman, concludes in his book, In Face Of Mystery: “…In religious myth and symbols, and in theological doctrines and reflection, we are dealing with matters of profound, ultimately unfathomable mystery; the ultimate meaning of human life, the final truth about the world and our place within it, is simply not available to us humans.”

So what do progressive Christians do with the “God thing?” First we admit that whatever it is, if anything, it is a mystery beyond our comprehension. We can rename “it” as the Supreme Mystery, Ultimate Meaning, Unity or…but I believe that it is time to reject the dualistic idea of two realms…the real and the mysterious, the natural and the supernatural. I believe that we can live our lives in such a way that we can intentionally create opportunities to experience that “God Thing.” I now experience the supreme mystery almost every day of my life in some place, in some thought, or with someone.

Secondarily it is time, once again, to admit that there is no one, nothing outside of myself that needs my praise, my thanks, or even my obedience. I can choose to live in harmony with the operating forces of the universe or I can ignore them. It will not affect what happens to me when I die. However, I also know that there are certain practices in my life that will help me see, hear, taste and feel the awesome miracles that are always around me and within me, every day, wherever I go.

And finally, we must learn to be comfortable in midst of the unknown. Like all humans, I often find myself clamoring for answers, clarity and security. If we want to be open to the awesome experiences of creation we must be willing to live in the face of the Ultimate Mysteries. I close with another one of my favorite quotes that hangs above me in my office:

“…what is called knowledge is everyday parlance is only a small island in a vast sea that has not been traveled…Hence the existential question for the knower is this: Which does he love more, the small island of his so-called knowledge or the sea of infinite mystery? “(Karl Rahner Foundations Of Christian Faith (New York: Crossroad: 1982), 22–23)

This article first appeared in the October 2012 edition of the monthly e-bulletin from Progressive Christianity.Org.

President of The Center for Progressive Christianity, in the US.