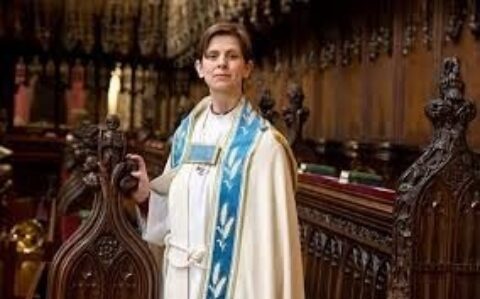 The Church of England continues to agonise over the decision of its General Synod to admit women into the episcopate.

Today there are 11 women bishops serving the church in places like Newcastle and Gloucester where they are diocesan bishops and nine other suffragan posts. So after more than a quarter of a century since women were ‘allowed’ by canon to become priests, the glass ceiling has been broken. Alleluia!

But protecting themselves from those shattered shards of glass is a minority of clergy and laypeople who refuse to recognise the validity of women’s orders. Some of them gather under the banner of a movement called ‘Forward in Faith’ (or ‘Backward in Fear’ as the late Bishop David Jenkins once called this organisation.) These so called ‘defenders of catholic order and doctrine’ express a great deal of energy in creating structures to guard their members against the ‘taint’ of women’s ministry.

Despite, then, the clear decision of General Synod, the good old C of E, in its attempts to honour the consciences of those opposed to women’s ministry, inevitably perpetuates misogyny and prejudice in the church by continuing to allow the recruitment of ordinands who oppose women’s ministry, thus perpetuating this discrimination. Furthermore the C of E published ‘Five Guiding Principles’ to give some reassurance to those opposed to women in the episcopacy. Two of these ‘principles’ read:

Earlier this year Bishop Philip North was announced as the new Bishop of Sheffield, a man opposed to women’s ministry. The outcry in the diocese resulted in his withdrawal from accepting the post and the subsequent fall-out was such that in true fashion the C of E asked a distinguished retired senior civil servant to draw up a report on the whole affair. Sir Philip Mawer did so over 74 pages in his Review.

(If readers wish to know more about this fulsome review please follow this link to read the Church of England's press release on the subject, which also contains a link to the full report.)

The greater context for those of us in PCN Britain is surely to recognise that in a time when the C of E and all other historic denominations are haemorrhaging members, such energies spent by the church and its leaders in agonising over women is absurd. To this end I wrote this letter to the editor of the Church Times, which he subsequently published:

Whilst Sir Philip Mawer’s scrupulously balanced report on the Sheffield Diocese debacle over the appointment of Bishop North will be poured over by those of us in Sheffield and beyond, we might also care to reflect upon your report two weeks ago of the latest British Social Attitudes survey, which revealed that 71% of 18 – 24 year olds declared that they were ‘not religious’. Overall 85% of all respondents declared they held no association with the Church of England. These people will not be reading 74 pages of civil service speak, attempting to explain and understand how a bishop who refuses to recognise the priestly ministry of women could be appointed to a diocesan role. They will not care a jot about Five Guiding Principles, which might speak of ‘mutual flourishing’ but which enshrine gender discrimination in the institutional Church.

No, the vast majority of our fellow citizens will only see a church out of touch with the society it seeks to serve. If the church really cared more about showing the transforming love of God and less about trying to paper over the cracks of sexual and gender discrimination, then we might begin at least to have some relevance to the lives of people who have simply switched off institutional religion.

Soon there will be a Colloquium in Oxford on the ‘Five Guiding Principles and I will attend on behalf of PCN Britain, since it is important that our voice be heard in these gatherings. But how much better if such gatherings were unnecessary, if the church were to concentrate its energies on bringing the kingdom of God to earth through putting into practice the teachings of Jesus of Nazareth, who seemed to value in his core group both women and men, who reached out to those marginalised and oppressed and whose resurrection was first attested by, guess whom? Yes, of course, women!