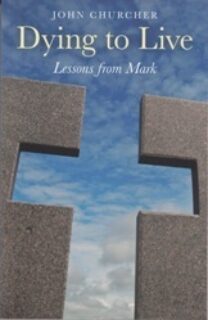 ​He presents the gospel of Mark as the author describing the events of Jesus’ life through the eyes of Peter. He also makes considerable emphasis of the fact that it is the only gospel written during the war – a time of bloody persecution by the Roman authorities - which ended in the destruction of Jerusalem and its temple, and the sacrificial system focused on the temple.

It is in this context that Churcher points to the hidden messages within the gospel. From the time of Augustus, Roman emperors had been ascribed titles such as “Son of God”, “Saviour” “Divine” indeed “God from God, Lord, Redeemer and Saviour of the World”. The people who were committed to Jesus claimed those titles for him. However to do so too plainly would have brought imprisonment and death.

So hidden within the text are various subliminal themes, too dangerous to express too openly. It is like the British soldiers captured by an enemy power, and forced to write a false account of what has happened for propaganda purposes. When he writes, “Tell everyone, especially tell it to the marines” – an accurate hidden message is conveyed to those who will recognise it.

Churcher gives a number of such examples of Mark disguising his message – plain to those who know, hidden to others. So good has been his disguising that too often his words have been taken literally, and so often the real point he is making is missed. This book helps to bring these out.

The key part of the message of Mark’s gospel is not a scriptural eulogy of Jesus, but a guide to how to live according to Jesus’ teaching. John Churcher not only makes it clear how relevant Jesus’ message was to his own times, but how significant and relevant his message is today. Getting behind the message of Jesus in Mark is a challenge to our theological, social, and political response to Jesus.

Churcher is a powerful advocate of a committed transformation of values and actions, inspired by the life and teaching of Jesus.