A US view on the need to reclaim bible study from conservative fundamentalists. 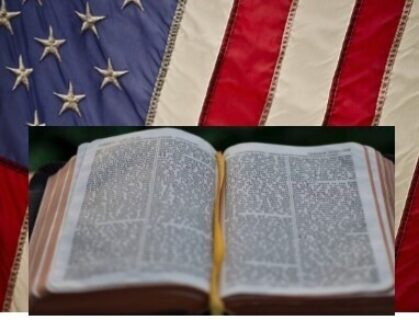 The alliance between the Republican right and the evangelical/fundamentalist church in America is often credited with getting Donald Trump get elected. For many liberals in the US, Christianity has now become part of their nation's problem. ​Jim Burklo is a progressive Christian author and academic. He recently offered this set of readings to his students as a way to redress the balance and to show Christianity in a politically progressive light.

The Bible bears good news for us and for our time. It is not "fake news". But what kind of liberating truth does it reveal?

This study of the Bible seeks inspiration for our quest to defend American democracy. Our approach to the biblical texts will model the resistance required to stop our nation's current slide toward totalitarianism. As we must interpret our present crisis without dogmatic preconceptions, we'll read the Bible without a doctrinal filter. We'll read the signs of our present times in historical context, and read the Bible in the same way. We'll be searching for biblical echoes in the U.S. Constitution.

"If the main pillar of the system is living a lie, then it is not surprising that the fundamental threat to it is living in truth." So wrote the avant-garde playwright and anti-communist activist Vaclav Havel, who went on to become the first president of the Czech Republic after the communist system there was overthrown. In America, Christianity has become a tool of a dominant political system built on lies. We will resist that system with a search for truth about the Bible itself, revealing how its stories can give us strength and hope.

Should it be surprising that many of the folks who claim to take the Bible literally also claim that climate change is a Chinese hoax, Obama was born in Kenya, and the poor will get richer if the rich get richer? "Alternative facts" in religion are directly related to belief in "alternative facts" in politics. There is a direct causal link between the Reagan era in the 1980's, when fundamentalist Christianity allied with the Republican Party, and the current President's denial not just of facts, but of factuality itself. Republicans manipulated fundamentalist/evangelical Christians into supporting their anti-tax, anti-regulation, anti-government agenda by pandering to the worst instincts of nativism, racism, and paranoia - the very opposites of the message and example of Jesus. Now our country is reaping a bitter harvest of hatred and falsehood. Christianity is part of our country's problem.

But it can be part of the solution. Faithfully following Jesus' law of love inspires us to stand up for LGBTQ equality, immigrant rights, women's rights, environmental protection, and decent social insurance and health coverage for the most vulnerable of our fellow citizens. Studying the historical roots of the Bible without supernaturalistic presumptions primes us to promote scientific and social progress.

Christianity suffuses American culture in profound ways. So the means by which we interpret the Bible have serious political consequences. Here we'll look fearlessly and critically at both the Bible and the daily news, and prayerfully seek guidance for our activism to preserve our precious freedoms.

1) The Bible is a collection of human writings about the quest of the ancient Jewish and early Christian people to work out their relationships with God and with each other. Anything in the Bible that looks miraculous or contrary to the normal functions of the natural world is not factual, but rather is mythological. In ancient times, the distinction that now exists between factual and fictional narratives did not exist in the same way as it does now. The Bible does not ask us to "believe" it as if it were a collection of facts or a set of legal prescriptions that necessarily should be affirmed or followed outside their original cultural contexts. Rather, its writings challenge our spiritual and moral imaginations, inviting us to use them as rich language for expressing our journeys of faith. Ancient biblical myths can have great power in positively transforming our lives today. In this study, we will study the Bible from the perspective of non-doctrinal, academic scholarship, richly illuminating the spiritual and cultural milieus out of which the texts were formed. I recommend the New Revised Standard Version of the Bible. It is the most accurate English translation from the most reliable Hebrew and Greek ancient texts.

2) Christianity is old, huge, and messy! There is no one way to be sincerely and truly Christian. The church is not and never was a single, monolithic organization or fixed set of beliefs and practices. So Christians today have very many choices about how to be Christian. This is both liberating and confusing. Here we embrace that freedom and that uncertainty, prayerfully opening our hearts to what can be learned and practiced of value in all of the branches of our rich and varied faith tradition.

3) In Christianity, there is no one final answer to the question: Who or what is God? In different parts of the Bible, God is portrayed contrastingly as one local divinity among others, the head of a council of divine beings, a universal supernatural power, the essence of existence, a jealous and vengeful father, a human being named Jesus of Nazareth, and Love itself. Within Christianity, we have choices about how to understand the nature of God.

4) Likewise, there is no one final answer to the question: Who was Jesus? Divine? Human? Both? A rabbi, a supernatural being, a radical revolutionary? Almost nothing is known about him other than what is found in the gospel stories of the New Testament, which are largely mythological accounts reflecting multiple early Christian interpretations about who he was, what he said, and what he did. By the time the letters in the New Testament were written, already there were differing schools of thought about the nature and identity of Jesus. The diversity of views has kept growing since. Christians have very many choices about how to understand and relate to Jesus, the central character of the faith. In this study, we will explore several understandings of the nature and the message of Jesus.

5) Other religions may be as good for other people as Christianity is for us. Religious pluralism reflects the spiritual humility that is intrinsic to Christian faith. How could the religion of a humble man, Jesus of Nazareth, get so full of itself that it could claim to be the only true faith for humankind? This study of the Bible aims to stay grounded in spiritual and religious humility. Whatever we say, whatever we discover, there will still be room for further learning and revelation.

6) What matters most in Christianity is not how we believe, but how we love. Christianity is the exercise of radical compassion, even toward our enemies. To help us grow in love, we practice the Christian spiritual disciplines of worship, social and political engagement, service, contemplative or meditative prayer, study, music, and artistic expression.

7) Christian love impels us to take care of our fellow people and to take care of our planet. That means working to change not only ourselves, but also our social and political systems, in order to reflect Jesus' radical compassion. This includes active resistance to forces that demean, degrade, and damage our fellow citizens and our world. This will be the primary focus of our study.

2) Biblical Anthropologies: Genesis 11, Romans 3: 23, Hebrews 2: 7. How do different passages in the Bible reflect different understandings of the nature of human beings? How did the framers of the U.S. Constitution understand human nature? How do these "anthropologies" relate to the current political crisis?

3) The Danger of Tyranny: I Samuel 12. How does the speech of Samuel relate to the current threat to American democracy? An interesting companion to this text is to be found in this interview with Timothy Snyder, who wrote On Tyranny. Snyder's examples are drawn from European history.

5) The Sermon on the Mount: Matthew 5-7. What were the politics of Jesus?

8) Charity and Change: Luke 10: 25-37. What is the difference between charity and social change?

9) The Kingdom of Heaven and the Kingdoms of Humans: Luke 17, Romans 13: 1-7. How do we make the kingdom of heaven real on earth - and in America - without establishing some kind of theocracy?

10) Non-Violence in Speech and Action: Ephesians 4; 25-32, Philippians 2: 5-8. How can we speak and act faithfully and humbly in the rough-and-tumble world of political rhetoric and action?