“The Enlightenment deposed the Cosmic Christ and made the quest for the historical Jesus necessary”. 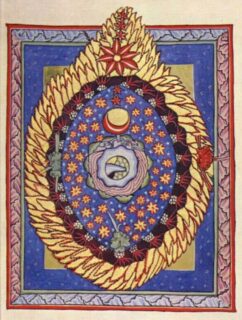 Jaroslav Pelikan, a church historian who is part Orthodox and part Lutheran says: “The Enlightenment deposed the Cosmic Christ and made the quest for the historical Jesus necessary”, Matthew Fox tells us. Matthew Fox says that the Cosmic Christ archetype, is not so much a dogma as an experience, it lies at the heart of pre-modern Christianity. It derives from putting the experience of the Divine before the building of empires. Teilhard de Chardin complained that he couldn’t find anyone—lay person or theologian—who wanted to talk about the Cosmic Christ. He also talked of what happens when the Cosmic Christ is forgotten. “Because it is not exalted by a sufficiently passionate admiration of the universe, our religion is becoming enfeebled.” The “enfeeblement of our religion”—is that not where we are at today? asks Matthew. Matthew proposes putting the Nicene Creed on the shelf for a while, a creed put together by an Emperor and Bishops of the fourth century in very Greek philophical concepts at the time of Christian empire building. The Creed is not from the time of Jesus whereas the Cosmic Christ is—indeed all the great stories of Jesus’ life are set in a cosmic context. The earliest Christian sources—Paul and the Gospel of Thomas– teach about the Cosmic Christ. It is a scandal, Matthew asserts, that these primary sources have been ignored especially in the modern era. (Medieval or pre-modern Christian writers like Hildegard of Bingen, Thomas Aquinas, Meister Eckhart, Nicolas of Cusa and more very often speak of a Cosmic Christ.)