“Real Bible Study”: On Seeing the Wood for the Trees

David Ireson recounts a lecture given by Jeffrey John, Dean of St. Albans. It was part of the Heritage Lecture series held at St Michael's, Dinham, Exeter and took place on April 2nd. 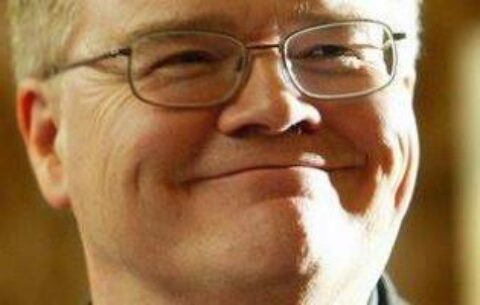 As the saying goes we look down into a well 2,000 years deep, and at the bottom see our own reflection; every age creates its own interpretation of the Bible. This problem was addressed by Jeffrey John with an outstanding lecture. He urged our making the effort to read the documents and books as the first Christians did. This, he said, can only help enrich and deepen faith and understanding.

We know, of course, that before Tyndale the Church insisted it alone had the authority to interpret the Bible. When he made the text available in English, Tyndale believed all, even the ‘ploughboy’, should be able to hear or even read and interpret Scripture for themselves. Jeffrey John’s inspired and engaging lecture explored this question brilliantly: Do we need the Church, its scholars and its commentaries to guide us today, or can we still read the Bible just as it stands?

In the Britain of today, many dismiss the possibility of the Bible having any further relevance. Those children who still hear Bible stories at home or in school all too often still rely upon their child’s understanding into their adult lives. When growing up in a secular and scientific world Bible stories make little sense. Unfortunately many of us have lost the ability to see truth in myth and story.

Jeffrey John pointed out that those who sit in the pews on a Sunday are fed with ‘chunks’ from the Bible; the classic problem of not being able to see the wood for the trees. He imagined the reading of Numbers 15.31+

“When the Israelites were in the wilderness, they found a man gathering sticks on the sabbath day. Those who found him gathering sticks brought him to Moses, Aaron, and to the whole congregation. They put him in custody, because it was not clear what should be done to him. Then the LORD said to Moses, “The man shall be put to death; all the congregation shall stone him outside the camp.” The whole congregation brought him outside the camp and stoned him to death, just as the LORD had commanded Moses.”

Who, proclaiming this reading in church, would wish to end with: “This is the Word of the Lord” ? Similarly, how can we proclaim to the congregation this passage from Psalm 109 ?

“Do not be silent, O God… wicked and deceitful mouths are opened against me... and attack me without cause… When he is tried, let him be found guilty; let his prayer be counted as sin. May his days be few… May his children be orphans, and his wife a widow. May his children wander about and beg… May the creditor seize all that he has; may strangers plunder the fruits of his toil. May there be no one to do him a kindness, nor anyone to pity his orphaned children. May the iniquity of his father be remembered before the LORD, and do not let the sin of his mother be blotted out… may his memory be cut off from the earth… let curses come on him…” Astonishingly followed by: “With my mouth I will give great thanks to the LORD; I will praise him in the midst of the throng. For he stands at the right hand of the needy, to save them from those who would condemn them to death.”

He went on to quote from the pastoral epistles. Elsie read a passage in his church which was written long before women were accorded any equality with men. She could only end with: “This is not the Word of the Lord” adding, it was just Paul being silly! Jeffery pointed out that the letters to Titus and Timothy were written long after Paul had died. Paul himself expressed things differently: Galatians 3.28: “There is neither Jew nor Greek, there is neither slave nor free, there is neither male nor female; for you are all one in Christ Jesus.”

The “Word” is Christ himself. To take each word of the Bible literally simply does not make sense. We simply cannot pick and choose ‘chunks’ from the 84 ‘books’ of the Bible without having first made the effort to explore its evolution from an oral tradition to the written texts written by authors who did not write for us but for the community they belonged to at least 2,000 years ago. In the kaleidoscope of places and people he said, each author’s ideas and purposes were constantly edited and changed.

Although few have had the time to study the Biblical criticism of the last couple of centuries (eg form, redaction and literary criticism) we must at least ask questions and not take texts at face value. We will find many contradictions and need to understand why. He cited the Lenten penitential Psalm 51. First used during the Exile period when animal sacrifices in Jerusalem were not possible we read:

“O Lord, open my lips, and my mouth will declare your praise. For you have no delight in sacrifice; if I were to give a burnt offering, you would not be pleased. The sacrifice acceptable to God is a broken spirit; a broken and contrite heart, O God, you will not despise.” However this same Psalm ends with these extraordinary contradicting words, obviously added once the people had returned to Jerusalem: "Rebuild the walls of Jerusalem, then you will delight in right sacrifices, in burnt offerings and whole burnt offerings; then bulls will be offered on your altar.”

Any attentive reader can discern how texts we have now were originally put together by editors drawing on several accounts they had in their possession. This is relatively easy to see when comparing Chapters 1 and 2 of Genesis. There are two quite different stories of creation. If you had the time it might be possible to discover, as scholars did over a hundred years ago, that the first five books of the Bible, the Pentateuch, was created from four main sources (labelled J/P/D/ and E). You might even come to realise that the Book of Isaiah was the work of three authors, if not a committee.

Turning to the New Testament, differences in the four Gospels are worth examining. Each was written for distinct communities with different experiences. These are reflected in the approach and concerns of each of the four Gospel writers. There is a huge difference between the deep simplicity of Mark’s account and the theological treatise which became John’s Gospel. A starting point could be to compare the Resurrection accounts and the words attributed to Jesus many decades after the event. It is interesting to see how Matthew omitted or changed passages of Mark when he wanted to write for a Jewish Christian community. Mark Chapter 7 has Jesus clearly saying that all foods can be eaten, whereas Matthew still holds that only kosher food may be consumed. We can find contradictions in how retaining the Law, the many laws, of Old Testament times, are mentioned in the Gospels and the Epistles. There were different agendas. How we now relate to Jesus himself and at the same time relate to the Church laws of today is equally worth some discussion.

Jeffrey looked at the difference between Mark and Matthew regarding divorce and a fascinating insight into how to read the Book of Jonah. This is a deeply theological work, not simply a mythical story about a prophet who is swallowed by a whale. Far more important is the truth that God’s love and concern extends to the Gentiles (in this case the people of Nineveh) and not just the Chosen Race. The same theme can be discovered to be the purpose the Book of Ruth. Ezra and Nehemiah might have wanted to pull up the drawbridge into Jerusalem and the Temple, so to speak, but the Books of Jonah and Ruth have a different message; a message of protest.

Jeffrey’s most read book is “The Meaning in the Miracles” published in 2001 (Canterbury Press) and his whole lecture was expressed in the same vein. The child in us sees Jesus healing the sick and performing wonders, but the Gospel writers wanted to focus on Jesus breaking through the prejudices and taboos of his time. He wanted to proclaim that the sick, the poor, the lame, deaf and blind were not sinners who could be treated as outcasts. Even today the seeds of prejudice, hatred and violence are just below the surface of our lives and break out all too often. We see this all too clearly in Africa, but, of course, there is little difference in Britain. The issue of women priests and bishops makes the point strongly enough. Jeffrey finished his lecture exploring symbolic meanings. The symbolic meaning given to numbers… 7, 12, 40, 4,000, 5,000, even the meaning of the153 fish mentioned in John 21, all these can wash over a church congregation. Without some effort to leap over the 2,000 year chasm, much of the meaning of Scripture is lost.

Today there are still many Christians who want to take every word of Scripture literally. They are sincere and their integrity cannot be questioned. At the same time they seem to be at odds with those Christians of a more liberal or radical persuasion and at times it looks as if the divisions between evangelical and liberal could deepen and even destroy the ecumenical imperative all churches are committed to. Jeffrey John was not dismayed in the least. He feels that evangelical Christians are more likely to read the Bible daily whilst many Sunday worshippers are content with their diet of Sunday ‘chunks’.

Jeffrey said that in our secular world we need to have greater courage in proclaiming the Gospel. At the same time we need to discover that to use a commentary can deepen our faith and understanding. He exposed many misunderstandings in his lecture, many contradictions and problems, but, in fact, exploring these only helps many to become ever more committed disciples of Jesus the Christ.

Biblical quotations from the RSV version.