In October 2020 I was fortunate in having my anthology of post-modern, progressive Christian poems, ‘Poems, Piety and Psyche’, published in the US, Although completed during the Covid19 pandemic, this collection of 130 poems has been a long time in writing and is my attempt to try and stem the decline in congregations which I have seen at first hand during my nearly forty years as a country parson. 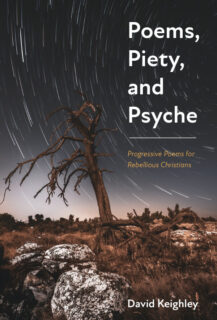 Few people would deny there is a crisis facing Christianity as numbers of clergy, finances and church goers are all in decline, and have been since the war. Sadly, year after year, national diocesan statistics reveal this drop, which if they continue at the same rate, will empty the churches of congregations in 2067 ending a run of 533 years as the established church, the Ecclesia Anglicana, The Church of England now faces the task of reforming itself following the impact of the pandemic on its congregations and finances and saving itself for future generations.

My poetry is designed to revitalize the church and reshape its future for current congregations and the missing generation of young people, scientifically literate, who are exiled from the church through its inability to absorb contemporary teaching of biblical criticism, the reality of evolution, the false idea of a God “up there in the clouds looking down”, and an institutional insistence on an unconvincing supernatural theology. We know that many young people find it hard to accept traditional teaching which for them is unbelievable, and many churchgoers from my past parishes have also told me how they also struggle with belief in some concepts whilst staying faithful to the church. My poems offer a different way of looking at theology which enables spiritual searchers to maintain their faith without throwing Jesus out with the bathwater of discarded doctrine. My school assembly mantra to the children was always “Don’t ask, ‘Did it happen?’, ask ‘What does it mean?” If we are unable to offer a new way of looking at and understanding our faith, then all the changes coming in church organisation and administration will simply be an exercise in rearranging the deckchairs on an ecclesiastical Titanic.

My poems try to reclaim the original gospel message, remembering that the writers were writing theology and not history, and enable continued belief in the essentials of Christianity, Bible, God and Jesus, but in a way that all clergy are charged with at their induction “to teach the gospel afresh to each generation”. Having retired from Winchester diocese to live in Meonstoke, I currently work as a couples psychotherapist, my original profession and I have put together a performance poetry show, also entitled ‘Poems, Piety and Psyche’, which combines my three main interests: poetry, spirituality and the human mind. Like my poetry. it explores the changing face of the church with a positive message of hope for the future. A future of love, for which our suffering world is in desperate need.

Endorsements from ‘Poems, Piety and Psyche’

“David Keighley probes beneath the surface of our faith and provides us with a basis for believing. So long as we have people like David, Christianity will live and renew itself.”

Bishop John Shelby Spong, former Bishop of Newark and author of “Why Christianity Must Change or Die”

“This volume of poetry is a true treasure. Poems are words so twisted and so pressed that they express the matter more densely and subtly than if they were left to their own devices. Poetry is always greater than the sum of its parts. David Keighley’s poems have a beauty and sincerity about them that sound the depths, soothe the soul, and touch the heavens.”

Professor Martyn Percy, Dean of Christ Church, University of Oxford and author of “Power and the Church”

“David Keighley’s word grenades - they aren’t quite verses - provoke and prod: What’s God? These gobbets of questing doubt are a lot more interesting than any virtual mass from an archbishop’s kitchen.”

Quentin Letts, ‘Times’ journalist, writer, critic and broadcaster and author of “50 People Who Buggered Up Britain”