Harry Houldsworth explains why he thinks prayer is still relevant whether or not you believe there is a God. This follows an earlier blog in October 2015 by Raymond Eveleigh. 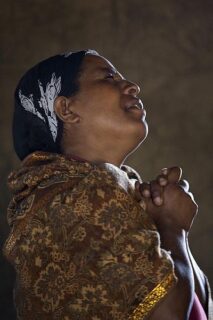 The subject of prayer opens a major can of worms and many people are frightened of discussing the subject, except among orthodox Christians who are comfortable with prayer and have definite ideas on how prayer works. I know several Christians in their ‘senior’ years, who are prepared to admit to losing some of their ability to pray in a meaningful way.

Many of us will have opinions why this is the case. As I see it, many people have missed an important point, or they have given up too easily. Maybe they assume wrongly that doubts about the existence of God automatically make ‘prayers’ redundant? And perhaps this thinking is widespread and does much to explain why many churches now attract few people at a typical church service?

I can only speak as someone who no longer has any inclination to see anything supernatural about prayer.

I don’t believe God interferes with laws of nature, and I have no idea what happens when we die, though I suspect that our memory disappears, as the hard-drive of our brain shuts down, producing a sort of ‘Nirvana’: the end. However, just because I cannot imagine eternal life, does not mean it will not happen.

Christians for two thousand years have thought differently and I have great respect for their views. I was educated to think as they do, and I constantly remind myself that they, not me, may be right.

So, when I go to church, I suspend (as far as is practicable) all negative thoughts and plug-in to worship and prayer, much in the same way that others ‘plug-in’ to the words and ideas of people they admire. (Later, they may re-evaluate what they have heard, but while they are listening, they try to exclude negative thoughts.)

The point I am making is that I have always derived, and still derive, great satisfaction from prayer. I get a lot out of it. However, first, I make an important distinction between private reflective prayer and public prayer.

Private reflective prayer is where you ask God for advice: such as the best way to sort out a problem, or for the strength to cope with a serious dose of cancer. You can’t practise it in a full church; there is literally too much ‘noise’ about.

It’s different to asking the wall for advice; the wall will not give you an answer. But if you ask ‘God’, and take the time to reflect on what God might say, you will (I believe) receive the independent advice you could get from a first class counsellor - and it comes free of charge.

It needs faith, of course, but you are tapping resources deep in the subconscious levels of your brain, in order to obtain a ‘take’ outside of the ‘box’ of your own selfish interests.

The thing to understand is that the answer comes from within (not from ‘out there’) and, maybe, this is how ‘God’ has always spoken to his prophets (through dreams and the human brain)?

In this way, I find prayer to be an effective way to obtain wise third-party counsel.

Note: It won’t work if you simply ‘talk’ to God (as is often the case with public prayer). Having identified a question, you have to meditate on it and think what God might want to say to you.

A parallel is a telephone conversion. You have to use the receiver, listen carefully, and think about what you are being told. By implication, (from time to time) you have to stop speaking.

Public prayer is different. This is where we identify issues that affect some, or all of us. We remind ourselves what the issues are, and individually and collectively we empathise with them.

We might be thinking about starving children in war-torn Syria. Whatever: public prayer heightens collective awareness, a sense of belonging, and our wish to help others; it also parallels what is happening in churches around the globe (other church congregations are similarly influenced by the same news’ reports).

I haven’t ruled out extra-sensory perception: some sort of communication of ideas by radio-type waves that spread out around the world, but I am equally happy if public prayer is seen by many as an effective way to spread the word about somebody’s illness (or about an international problem) with the result that it galvanises a dozen or thousands of people to do something about the problem.

Public prayer is a manifestation of the idea that ‘God helps those who help themself’. It is group therapy and helps many people cope with life pressures, stress, and bereavement. Naturally, orthodox Christians will wish to stress their belief that God is listening to the prayers, and explain how they believe God answers prayers. I have no problem with this. The essential idea is that in a church every person attempts to minimise ‘self’ and seek strength from group ideas and fellowship. We all need to be in the ‘listening mode’, unless otherwise instructed. Members of the clergy need to be aware that ‘plug-in Christians’ are in church and (from time-to-time) adjust the way they speak.

None of these thoughts bear any resemblance to the way Medieval monks thought about prayer, because I was born in the twentieth century. In the twenty-first century, many young people may believe that even my ideas are ‘Medieval’. This is what happens in a rapidly changing world, and all Christians and Church leaders should be aware of such factors when making assumptions about what people should believe today.

The subject of prayer needs a lot more discussion by orthodox and progressive Christians.

I do not imagine that my understanding of the way prayer works will satisfy everyone. I am sure that, initially, it will horrify orthodox Christians, until they learn that there are multiple approaches to ‘Faith’ and start to empathise with the idea that the duty of every Christian is to show a little understanding of the real problems many people have with prayer. Then, Christians may discover a way to stop former or potential Christians ‘voting with their feet’ and encourage new people to come into church.

I want to encourage everyone to believe that prayer is an important tool that can be used by all (even by someone who says that she/he does not believe in God) to develop spiritual, psychological and sociological strengths.

I have recently enjoyed reading and making extensive notes/personal comments on the book, Christian Atheist, by Brian Mountford (O-Books, UK, 2011). The book provides evidence that atheists come into church and get immense satisfaction from church music and singing hymns. Such people need to be encouraged further. More people like them need to come to church and ‘plug-in’ to Faith, to prayer, and to worship.

Plugging ‘in’ to Faith is a way of drawing strength through fellowship. But it needs to be consciously done. It is not a form of ‘pretending to believe’, or a way to make others think that you are one of ‘them’. One has to make a decision to ‘run’ with the idea (much in the same way that one uses software on a computer). One ‘runs’ with it, enabling one to tap into an under-used energy source. It is not dependent upon full comprehension of religious doctrine. Thus, ‘plug-in Christianity’ provides an effective way to encourage intelligent people to engage once more with the Church.

With ‘plug-in Christianity’, ‘feedback’ is extremely desirable. The opposite (an ‘inquisition’) will be counter-productive.

These are personal thoughts. But it would be wonderful be if the subject can be given further consideration by as many of us as is possible.

Note: As with my collected notes and comments on Jesus: L’homme inconnu, by Christine Pedotti, (XO Editions, Paris, 2013), and Jesus for the non-Religious, by John Shelby Spong (Harper Collins, 2007), I am prepared to email free of charge the notes and comments on Christian Atheist as a pdf file to anyone who writes to me at houldken@gmail.com requesting them.