In our eleventh newsletter Adrian gives news of our film project. 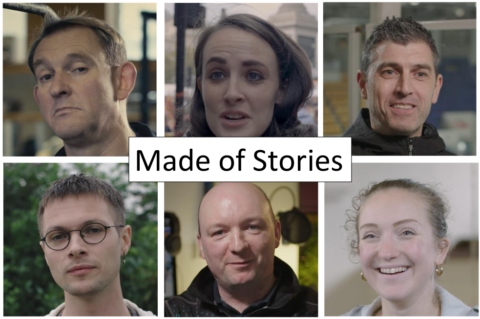 During this pandemic, especially during the time of lockdown, most of us will have watched on our TV’s or tablets more programmes, films, box sets than ever before. 98% of all households possess a television and in some homes there will be numerous i pads, lap tops and mobiles. When I was a boy in the 1950’s there was just one TV channel, in black and white, when Watch with Mother (!) meant settling down to Muffin the Mule or the Woodentops. Contrast that to today when my 5 year old grandson has two controls in his hand, one negotiating the Amazon firestick and the other scrolling through a myriad of catch-up children's programmes. Such technology has been a tremendous lifeline for so many over the last three months, not least for people living on their own and missing the company of friends, missing their choir or the visit to the concert hall. We can now access the National Theatre on line, opera from some of the world’s great opera houses, our favourite Festival bands – all at the click of a switch or mouse! Of course its no substitute for live performances with all the atmosphere of the theatre or concert venue. Similarly on-line worship is hardly equivalent to attending church or mosque but its better than nothing. I confess that I have been doing a bit of binge watching. So I have watched ‘Spooks’ for the first time, even though it is about 12 years old as a series! In my highbrow moments I settle down to a good classical recording from my Apple Music store, my ancient vinyls or my CD’s. But I also (unlike Christine) enjoy some of the dark humour of Killing Eve or thrillers such as Line of Duty. It’s a far cry from my days as a busy parish priest when getting in by 10pm from yet another evening meeting meant a TV diet of the News! ‘Catch up’ was asking Christine how her day had been! So perhaps it is fortunate that, at this time, PCN’s latest venture, that of commissioning some short films will very soon be coming to a tablet or screen near you! Members and groups will know that the PCN trustees decided to apply for grant aid to enable us to commission six short films to be made by a professional media company. With further financial support from members we have been able to bring the project to fruition. To date five of the films are ready and each is a personal story which will move, disturb, challenge or encourage or a mixture of all of these responses! Made of Stories is the title of the series from PCN Media. I know that PCN members have been waiting a while to see the films. But now they are finished and sub-titled for those who will appreciate this. Next week the trustees will decide on when to release the films to all our members and I am pretty sure that they will agree to let everyone have details of the website, and the resources backing up the films, by early July. Many of our PCN groups are already having on line Zoom meetings and these 5 – 7 minute films might be ideal for groups to share as well as individuals to watch at home. So alongside your favourite You Tube catch-up or TV box set I hope you will greatly enjoy watching Holly, Nathaniel, Gemma, Greg, and Patrick and Davy tell their stories. And then lets begin the conversations! In the meantime why not let Sarah have your contribution for this newsletter – perhaps you have a viewing recommendation to make? Go well. Adrian Alker, Chair PCN Britain

Thursday Evening: 8 o’clock. Do you go outside, at eight o’clock on Thursday evenings, and clap? What started as a way of saying thanks to doctors and nurses has now been expanded to include staff in care homes and nursing homes, not to mention the army of paramedics, physiotherapists, radiographers, pharmacists, pharmacy technicians, porters, cleaners and all other supporting staff, from the managers who make things happen to the operatives who collects the waste. So, we clap. The practice of clapping started several weeks ago. People came out and clapped and then went back indoors again. Recently however, in a number of places, it has assumed other and unexpected dimensions. At eight o’clock, on cue, neighbours emerge from their lockdown locations, they clap and, talk to one another, socially distancing of course, they talk of friends and family, talk of their lockdown experiences. They didn’t used to do this, a nod, a good morning, was sometimes as good as it got, when we passed one another. Now, greetings are shouted from the pavement on one side to the pavement to the other, even down the road to more distant neighbours. In one location, a lady with a good voice, leads community singing and, in another two violinists set up their music stands and sheet music and play to their neighbours. In another neighbourhood a socially-distanced bottle of wine together with cake and biscuits has been appearing. As the effect of the Pandemic is running it course, we have been aware of caring for neighbours in the community at an organised level as well. Bournemouth, Poole and Christchurch Council, Christchurch Community Partnership, Christchurch Foodbank and other organisations have played a leading role in caring for neighbours who have specific needs. The eight o’clock clappers have shown and continue to show that they care, in a different way, not only for those caring in the NHS, care Homes and in the community but also, in a quite unexpected way, for one another. The New Testament records nine occasions when the familiar phrase ‘Love your neighbour as yourself’ appears and I suggest this is what we are trying to do, when we go and stand outside on a Thursday evening to clap. But it is at three levels. Yes, love your neighbour in the healing and caring professions, love your neighbours who live next door or across the road, but love also those whom Jesus highlighted on the story of the Good Samaritan. Remember how it finishes? “Which of these three do you think was a neighbour to the man who fell into the hands of robbers?” (The man who fell into the hands of robbers was a victim of the violence in the society in which he lived at that time.) There are victims of a different sort in our society today; victims of homelessness, victims of domestic violence, victims of a failed welfare system, Victims of loneliness - too often ignored by a society that has failed them. In answer to the question that Jesus asked: who do you think was a neighbour to the man who fell into the hands of robbers? 37 The expert in the law replied, “The one who had mercy on him.” Jesus told him, “Go and do likewise.” A prayer for neighbours May we look at others as if through your eyes, less judging, more loving, and seeing them, like us, as not perfect or finished but as a work in progress that will be completed in due time by your hands.
Amen.
Eric Johnson, PCN Member

Last week, having bemoaned in the newsletter the fact that I was missing seeing family and friends, just as the emails were being sent the Prime Minister was announcing that I would be able to do just that. Granted that still doesn’t include my parents as they are in Wales and more than five miles from the border but all in good time. On Sunday I was at my archery club which has just restarted and was talking to a couple who, before the pandemic, used to babysit my daughter once a week or so. I told them that we would be happy to host them in our garden and made tentative arrangements for this week. After we had finished chatting I went back to the shooting line and the archer next to me (seven metres distant and fully compliant with Archery GB rules) asked whether I was related to the couple in question. I replied no, that they are simply friends but that my daughter is a sort of surrogate granddaughter to them. She smiled and said “So they are family, the family you chose. That’s the best kind of family.” That got me thinking about how I am fortunate to have a good, strong family. We have had many problems, we often forget birthdays and we don’t see each other as much as we would like but on the whole, and remembering that no family is perfect, I would also choose the family that I was born into. As blessings go, that’s a big one. Sarah Guilfoyle, PCN Administrator