Launch of our PCN films I am delighted to let all PCN members know that the five short films commissioned by PCN are now available for you to see! You can access the films by using this website address : https://madeofstories.uk 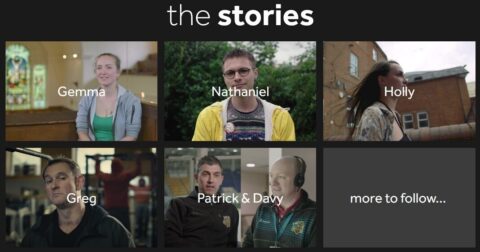 Alongside the films you will find questions for discussion which groups might want to use, alongside resources such as relevant websites and further reading to encourage you to explore the issues raised by the films in more depth. Thanks to the generosity of PCN members, you are the first to see these films which will be promoted more widely in the coming weeks. Please feel free to let others know of the website link. We do want the films to be viewed by a wide audience! We will shortly have a page on our own PCN website where you can discuss online the films and we would value hearing from you about further resources which you think can be added. The films will also be linked to our Facebook page for those of you who use that particular social media platform for discussion and comment. Made of Stories marks the beginning of our adventures into the film media and we hope that further films might follow. We shall also be working alongside the Student Christian Movement (SCM) in promoting the films to a young audience. We hope the films might be shown and their content discussed by our many PCN groups. Convenors can request a discussion booklet about the stories if the group intends to use the films in its meetings on Zoom or in any other way. Contact me to request a booklet. Finally, we are indebted to the people who volunteered to tell their story and to Shortform, the media company in Manchester, who have produced such professionally executed short films. Adrian Alker

Context Doing a jigsaw puzzle is usually an activity for cold, wet, winter days but in this time of lockdown it is one way to keep the brain ticking over. We lay the pieces out, face up, and start to assemble the edge pieces. This defines the boundary and the pieces are easily recognised by having one straight edge. Then we build on any well-defined feature in the edge because we can usually see distinctive features in individual pieces. Difficulties arise when tackling featureless sky, sea or other aspects. There is little to guide us and we start to rely on the shape and size to fit into the space. It is only by chance if we manage to lay out the pieces the right way up and trying to recognise the piece we are looking for is made more difficult if it is up side down. We build up an image of what we are looking for by using shapes, colour or features. Many pieces only make sense when seen in the context of the whole picture. Sometimes we have clear supporting evidence of surrounding matching features and much depends on the style of the picture. Doing jigsaws is stimulating, frustrating, absorbing and keeps us busy. I am reminded of the danger of taking a verse or text from the bible without reference to the context of when, where and by, and for, whom it was written. It is possible to distort the original meaning of words beyond recognition, by lifting them out of context and trying to make them fit into another, completely different context. Thankfully, today, there is greater acceptance and understanding of the importance of context. This, I think, helps to reveal the timeless value of ancient writings. Especially at this time when we perhaps feel isolated, lonely, cut off and of little value, it is good to remember that we are still a very important part of the bigger picture and, one day, things will fit into place again David Kemp, PCN member

Recently the world has not been an easy place to be for me. I learned of the death of a friend and she was one of those people who although I hadn’t seen her recently the thought that I shan’t see her again is very difficult. She was a smiling person, a person that whenever you ran into her, no matter how busy she was, she made time for you, she listened. You never parted company feeling that you had been rushed and that was her gift. I shall miss her very much, especially when choir restarts as she was one of the sopranos against whom I (and a few others) checked pitch, I suspect that our choir will very much notice her absence when the sopranos start to drift. We were better together and will be poorer without her in so many ways. I was also on the periphery of a contentious Black Lives Matter event that took place a couple of weeks ago after much dissension. Insults were being used by people on both sides with scarcely a second thought for the impact that those words could have, positions became entrenched and sides were taken by people previously apathetic or disinterested. The common thread here is listening. Any of you who have taken part in Natural Voice singing will know that when you listen to one another the sound becomes stronger and clearer. When the choir does not listen, not just to their own section because the sopranos often pitch against the basses or the altos (less so the tenors, sorry), it falls into discord. Some of the comments directed at Black Lives Matter are deeply troubling to me and yet I still need to listen, I need to be able to hear what they are saying in order to understand why they are saying it. Whether the comments come from a place of anger, fear, pain, hatred or simply from a lack of understanding; if I do not listen then discord is inevitable. Discord may occur anyway, I have been at choir practice when despite the best efforts of our experienced choir leader we have simply had to abandon a song because for whatever reason we just weren’t getting it. We come back to it a week later and the shape of the music has settled into our minds and we sing with little effort that which previously seemed impossible. And so I will listen and do my best to create harmony from discord and hope that in time the words of peace and compassion will settle in the minds of people not yet able or willing to listen. The world is not always an easy place to be but I think of my friend who helped me understand how to listen truly and I smile. Sarah Guilfoyle, PCN Administrator