This is the eighth weekly newsletter. 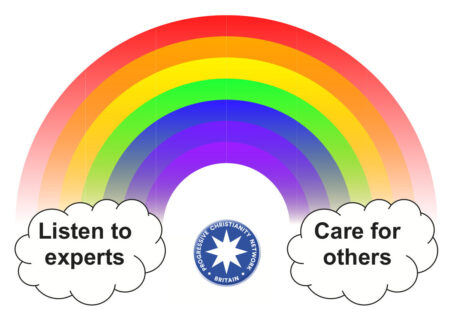 A sneak preview of the back cover of June 2020’s copy of Progressive Voices. This is also available to download from the website. www.pcnbritain.org.uk/resources/publications/pcn_rainbow What changes do we want to see in our country as a result of this awful experience of the coronavirus? This was the invitation I gave to PCN members in the fifth of our weekly newsletters, back on April 23rd. Already we have received nineteen emails in response and we hope others may wish to take up the invitation to reflect upon what we are learning about our economy, our workforce, our environment, our priorities as a nation. I thought I would try to highlight in the coming weeks some of the wished-for changes which members have written about. So here is one possible change! Three members have specifically advocated the introduction of a Universal Basic Income. Even before this pandemic, millions of our fellow citizens were living very precarious lives, dependent upon a range of benefits, often pushed into poverty through insecure work in the gig economy. The government is now having to recognise that those workers in care homes and similar jobs, who are earning only a minimum wage, are the most valued in our virus-ridden world as they care for our loved ones. And yet some company executives, even at this time, are pocketing millions of pounds in bonus payments, some living in tax havens are seeking compensation for their businesses from taxpayers money. Universal basic income when coupled with changes in the tax system to achieve a more just distribution of wealth may be an idea whose time has come – so thinks both Nicola Sturgeon and Pope Francis! Finland has experimented with the idea and currently the socialist-led Spanish government has got plans to roll out a basic income to a million of the country’s poorest households. Presently our government, to be fair, is pouring money into job retention schemes and is having to face up to some very basic questions about how ALL its citizens can live in security. Might Universal Basic Income remove the whole strivers/skivers binary view of life? Might UBI give peace of mind, a mentally healthy outlook to those who presently lack self-worth? Might UBI approach something akin to the just and compassionate society which Jesus called the kingdom of God? UBI could provide a unconditional safety net, speaking volumes about how everyone is valued for who they are. If you want to carry on this discussion in more detail around UBI I will put this as a blog on our website. Next time we will look at another of your responses to this crisis. In the meantime keep emailing us the changes you wish to see! Stay safe, blessings Adrian Alker,PCN Britain Chair

A message from Jess at the DVD library Do not worry about returning your DVD if your group meetings are on pause. All loan dates have been extended by six months and nobody is at the moment waiting for your current DVD because so far we have been able to juggle between multiple copies, and/or divert fresh hirers to other titles. I’ve had interesting news from some PCN groups who are planning to continue their meetings in a new way. At least one group was about to resume the course where they left off - but in a zoom meeting, and two groups are planning to start new DVD courses in this way. I expect we’d all like to hear the experiences of these pioneers, if they would be willing to report back to the rest of us. My first concern was whether there might be a performing rights problem, but someone explained that as long as it is a meeting with known people, rather than a public performance open to all this is just another way of meeting. In any case I would expect the publishers to understand. Just one other notice from the DVD library. Existing hirers have already paid the cost of return postage on all discs in their course and should use their return labels as normal with no additional payment required. The postage cost for all new hires from today will increase in line with Royal Mail price changes this year. These changes have affected both the outward and the return prices. It will be £3.50 per disc package – but this still covers return postage and any Royal Mail price rises during the period of your hire. https://www.pcnbritain.org.uk/resources/dvd-library best wishes, Jess

Gretta Vosper once wrote that it is time for “humanists and atheists, sceptics and agnostics to see they share a common future with the many who are still comforted by their religious beliefs”. Perhaps now more than ever that must be true. If ever there was a time for people who want the best for society, people who seek ‘the common good’ to be willing to work together, this must be it. Like many of us, my mind has been turning recently to the future – life ‘post covid19’ – the much heralded ‘new normal’. I think lots of people really just want the old normal back, and I don’t blame them. We get used to things, and we like them that way. I like to have pizza on a Saturday evening, I don’t mind a change every now and then, but I look forward to getting back to normal. How much more so for those who have found their lives turned upside down by the virus. There is a danger sometimes that we ‘progressives’ find ourselves permanently socially distanced from our more conservative counterparts, perhaps because we’ve been hurt, or just because we find their theology weird, annoying or plain boring. The reason that this is dangerous is that it has the potential to stop us from making common cause with them when it counts. And right now it counts. We may be fed up with dodgy doctrine, but ultimately we need to work together to ensure that the poor are cared for. We might not be interested in hearing the latest news from their church, but we need to find a way to keep food banks running. We’re on the brink – perhaps we’re over it already – of the biggest recession in living memory, this has the potential to drive people into appalling poverty, if they weren’t there already. It’s time for us all to work together, sceptics, agnostics, atheists, die hard conservatives, and the ‘non binaries’ too for the sake of human flourishing. Simon Cross, PCN Trustee

I have never really got into mindfulness; I have been on various courses and know it works for others but it has never really struck a chord with me. Until I watched my daughter helping me bring the washing in. I pass the washing from the line to her and she in her infinite 19-month-old wisdom selects the precise spot within the washing basket where the item needs to go. A tiny pair of leggings here, a pair of socks there. When the washing pile gets too high in the basket I ask her to squash it down and she considers her task before attacking the previously perfectly piled washing with great enthusiasm. She squashes and squashes letting out little huffs of exertion as she does so. When she is finished she looks at the compacted washing, smiles with satisfaction and then wanders off. Toddlers are great at mindfulness and being in the now, they are utterly focussed on their task and pay attention to each and every detail of it until it is completed to their exacting (and unfathomable) standards. From her I learn that each task has a value of its own and that I should pay attention to it, not divide my mind between things. This is easier said than done when one has many different roles that often require attention at the same time. Although that is the lesson, these things may all ask for my attention at the same time but I can only really focus on one and accomplish it to the best of my ability. The wandering off though is the point at which the lesson on mindfulness ends and I need to move from being mindful to being watchful because as every toddler knows, everything is better with added mud, even the washing. Sarah Guilfoyle, PCN Administrator