Andrew Parker makes a case for the rejection of military might, taking his evidence from the Hebrew Bible. 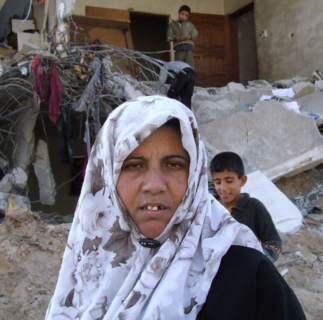 The Bible is all over the place when it comes to the justification, or otherwise, of military might. This makes it easy for preachers to ‘find’ that it supports their personal views (whatever these are) if they carefully select their texts and employ ingenious hermeneutics. The net result is that those who still have the vestiges of an ‘open mind’ are left with the feeling that the whole thing’s an impossible mess. Is there any hope of rectifying this lamentable state of affairs by approaching the biblical texts somehow differently?

Well, we must admit the situation is complicated; first because not all biblical writers shared the original revolutionary perspective, and second because the resulting opposing ideological positions themselves developed as the fortunes of the community changed. That said, I am pretty certain the main reason for this embarrassing situation lies elsewhere, viz. in our own inability to identify the revolutionary ideology which makes the Bible such an extraordinary text despite our mistreatment of it.

Let’s not beat about the bush. For a long time Catholicism (e.g. Constantine) tried to kid us that a radical conservative ideology encompassing an avocation of well-directed military might lies at the heart of the Bible and that it is this which basically drives it. However, with the advent of the bourgeois revolution this view was challenged when Protestantism (e.g. Luther) in its turn tried to fool us that the driving force was in fact a revolutionary liberal ideology which too was not adverse to a proper use of coercion. More recently still, as a result of the proletarian revolution, a new breed of biblical commentator has tried to pull the wool over our eyes so we mistakenly believe a liberationist ideology drives the Bible. As a student I liked their work but could not help noticing that liberationists rarely openly call themselves socialist, even though it is perfectly obvious that is what they are and it is well known that socialists have historically been in favour of a properly managed use of force.

Such bogus theories have had their day but we will have to save an analysis of their glaringly faulty logic for another time. Instead, let us see the ideology driving the Bible for what it actually is: the rationalisation of a marginal Hebrew perspective on life. (Let me remind you that the word Hebrew was originally a derisory term used by the bureaucrats of civilisation during the second millennium BCE, to designate the many losers who were drifting about in the ancient near east during this epoch.)

To return to the issue before us, what does the Bible say about military might when we read it from this marginal Hebrew perspective? Let’s begin by setting the scene. Leaving Israel aside for the moment, all the other societies in the ancient Near East, without exception, operated with traditional, conservative ideologies. They were, therefore, authoritarian, centrarchical, military-might societies. Revolutionary Israel, on the other hand, so we are told, operated with a non-authoritarian, on-the-level, covenantal ideology. It stands to reason, therefore, that she lived in complete defiance of the rest of the world. So how was she to avoid being blown away by it? That was the million-dollar question.

Well, according to the texts, in the beginning, as the lowest-of-the-low kind of slaves in Egypt, the fledgling Israelite community lived not only with a complete absence of military might but also without any political clout of any description. As a consequence she was forced to rely on the only power under her command: her ability to shame her adversaries. This meant standing up to the authorities and arguing that in all justice she should be allowed to leave to follow her destiny in the wilderness. This strategy of shaming – which paralleled the rest of the world’s strategy of military might – Israel enshrined in a covenant agreement with her god Yahweh, the god of the Hebrew marginals, that is. She agreed to stand up for herself and shame her adversaries, if Yahweh for his part promised to vindicate her efforts. To us civilisation folk the whole thing sounds quite mad. However, none of us can deny it was the right thing to do in the circumstances… or that it was the beginning of something momentous… but would it work? One can’t help seriously doubting it!

According to the texts in the immediate situation the Hebrew strategy both ‘worked’ and ‘did not work’ since the Israelites achieved freedom, but not as a result of the Egyptians being shamed. This was just the beginning of the Hebrew revolutionaries’ problems for, as with all revolutions, reaction (opposition from exterior conservative forces) and revisionism (backtracking by members of the revolutionary cadre) were quick to rear their heads. According to the texts revisionism came first with an attempt by some to reintroduce the ‘normal’ structures of conservative authoritarian rule. We are told Moses used his Levitical police to re-establish revolutionary order with the utmost vigour and dispatch [Ex. 32]. This is not a case of the use of ‘military might’ but it’s not ‘a pretty picture’ either. However, it certainly makes the point that for Moses there was nothing more important than the maintenance of the revolution, without which there was no marginal hope.

We are told that reaction came later when the community tried to find a home in the central Palestinian highlands [Gen 12-34]. Here they were confronted by the Canaanites, which is to say the established conservative authoritarian communities. We are told that Israel’s cousin communities of Moab and Ammon made the disastrous mistake of trying to integrate with such people [Gen 13, 1-13; 19] and of how important it was for Israel, if she wished to maintain her revolutionary integrity, not to make the same mistake [Gen 34]. Once again we have here anything but a pretty picture – the writer himself being well aware of this – but his point is unmistakable. The Canaanites constituted the most serious ideological danger for revolutionary Israel and they were at their most dangerous when they were most accommodating.

A more serious reactionary threat came with the appearance on the scene of the Philistines, and the struggle was protracted. It became evident that the community could only survive by undergoing some sort of restructuring. The question was how to do this without threatening its revolutionary Hebrew basis. The ‘solution’ came by stages and finally led to the creation of the Davidic kingship. From the texts it seems clear that the central issue was not the revolutionaries’ fear of the creation of Israelite military might – which seemed to one and all patently necessary – but rather a fear of the creation of authoritarianism [1 Sam 8]. Such political blindness had huge repercussions.

It was, of course, the prophets who had to deal with the consequences. For whatever the nature of Israel’s kingship (and one can’t help but think here of the parable of the trees [Judges 9.8-15]) her albeit involuntary adoption of the strategy of military might inevitably led to her becoming virtually indistinguishable from the surrounding conservative communities. This caused Amos, and all those following on from him, to condemn her in no uncertain terms [Amos 1-2] and to predict that Yahweh would abandon her for her covenant breaking: a prediction fulfilled in the exile.

But with Cyrus’ decree that some of the exiles would be given permission to return, the idea arose in the mind of ‘Second Isaiah’ that maybe, just maybe, Yahweh was giving Israel a second chance. He consequently reformulated the revolutionary, shaming strategy for this momentous occasion, calling on Israel once again to become Yahweh’s faithful servant by performing as the light to lighten the Gentiles. This meant living together in radical solidarity, thereby exposing the abject shamefulness of the surrounding conservative societies’ authoritarianism - including, of course, their espousal of military might. However, once again revisionism in the form of Ezekiel and his disciples brought this hope to nothing and after a bitter struggle between these ideological factions Second Isaiah’s disciples were finally silenced.

It was, of course, Isaiah’s hope of Israel becoming Yahweh’s light which Jesus resurrected. The Gospels tell us that he specifically toured around the geographic areas where Jews were living together, calling on them to join him in fulfilling the Law and the Prophets, his conviction being that such a demonstration would cause Yahweh to fulfil his promise. Gentile hearts would effectively be softened and Yahweh’s kingdom would finally be ushered in; military might having no role in all of this except in being shamed and banished.

But what about Jesus’ strange saying that his disciples should carry swords (Luke 22.36)? It seems to me this was simply part of his prediction that the Jewish nation would reject his call, favouring instead a nationalist revolt i.e. military might. In the ensuing breakdown of order it would be better for his disciples to be armed. You see Jesus was not motivated by pacifism. His was putting into effect the ancient revolutionary strategy of the Hebrew marginals: shaming the world through demonstration… something rather different.