What has Christianity to say to a grieving nation and families overwhelmed by grief? The chair of PCN Britain, Adrian Alker, offers this commentary. 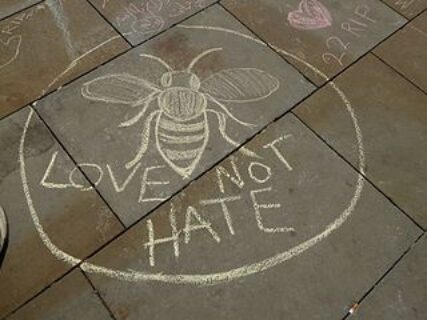 The atrocious and heartbreaking attack at Manchester Arena has left us all shocked, saddened and, yes, angry, at the loss of so many young lives. Of course we read and see via the media similar outrages across the world. A few days after the tragic event in Manchester, a similar number of children – all Coptic Christians –were killed by Islamic extremists in Egypt, where the minority Christian population lives in fear. But Manchester, a drive away, brings home the horror of such murderous ideology of Isis and associated terrorist groups.

Many PCN members will have fears for their own children and grandchildren, their godchildren, nephews and nieces, growing up in a world and in a country which seems so much more on edge, more dangerous than when many of us were children in the 1950s or 60s.

Growing up in Wigan, Manchester was always the city I regarded as my home city. Later I was to do a postgraduate year of study there but when I was in my teens, I regularly hopped on the train to Victoria Station, to buy my early vinyl LP’s at the Shudehill outdoor market. That market of course has gone and nearby stands the imposing Manchester Arena where today’s teenagers enjoy their music, as I enjoyed mine.

PCN members will all have their memories and associations with places which have suffered tragedies of one sort or another. You may live in London and have painful memories of the 7/7 bombing or in Belfast in the years of The Troubles. Many people in Liverpool and Sheffield in 1989 have never forgotten the horror of Hillsborough and the loss of lives young and old.

What has progressive Christianity to say to a grieving nation and families overwhelmed by grief? Our starting point is what we have seen and heard from Manchester itself, the overwhelming compassion of its citizens, be they the emergency services, the medics, the taxi drivers, the neighbours, the hoteliers. Compassion is central to our understanding of the life and teachings of Jesus of Nazareth. More than kindness and good will, compassion opens up, ‘hatches’ our hearts and for many points us to that absolute of Love, often defined as “God’. Compassion, as told classically in the Good Samaritan parable, transcends and indeed overcomes religiosity. Compassion knows no bounds, obeys no rules of purity or doctrine but rather invites us to be fully human. Compassion is at the heart of the world’s great religions but so often the followers of those faiths have betrayed their calling.

Perhaps the second spur from the Manchester tragedy is for PCN to continue, as many other organisations and churches are doing, to work tirelessly for greater dialogue and honest encounter between people and communities of differing faiths and ideologies. Some of our PCN groups in places like Birmingham and the work of Howard and Maria Grace in Newbury give us all the encouragement to engage in this vital work. The dangers of fundamentalist religion of all kinds seem ever present and PCN would always seek to challenge those who promote such views of religion.

For now the least we can do is to hope, pray, yearn, that the grieving and the injured, the traumatized and the sorrowful will experience the power of such love and compassion to enable them to face the coming weeks, months and years. And the more difficult and challenging imperative is to work for a transformation of the heart by all whose perverse understanding of religion leads to such cruelty and hate.