Letter from a refugee kitchen in Athens

PCN member, Bob Harvey has volunteered to get personally involved in helping refugees. He helps to prepare meals which are then distributed each evening in the city's Victoria Square. 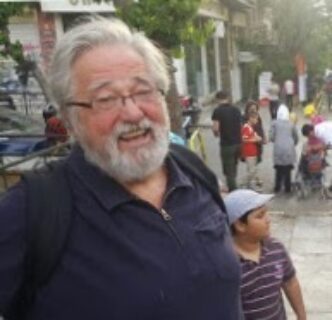 Two new volunteers appeared at our store-room this morning: a girl from Denmark and another from Switzerland. They had been working on a project on Lesvos, and most of their group had transferred the operation to Athens where the need has been increasing.

The task is self-imposed since when I had my restaurants in the 80’s I learned the trick of Onions without Tears and can quite happily plod on with my three knives (one for splitting, one for slicing and one for chopping) filling two huge plastic buckets with about 11kg each of prepared onion, ready to be incorporated in a stew, a soup, a rice dish or whatever Neezo decides to put on the menu that day.

Neezo is the driving force behind the operation, a Swansea-origin Welsh Muslim of Libyan extraction, closely supported by his two henchmen, Vlad Y Mir and Al, - a Romanian and a Turk – two gently spoken individuals who quietly get on with whatever needs to be done. Then there’s Sam (he’s English,) who learned volume catering at music festivals and a platoon of irregulars who float between a variety of projects at different locations around Athens.

When they are not working in our kitchen operation, they might be tackling anything with other groups, from erecting facilities at detention centres to running English Language courses or organising creative workshops and playgroups for the hundreds of child refugees to be found around Athens.

Every one of us has paid our own fare to get to Greece, and pays our own way once we’re here, either by sharing with other volunteers or by finding a hostel or other alternative accommodation, and we usually eat the same as whatever we’re preparing for the refugees, as long as there is enough to go round.

Why do they do it?

Whenever someone new appears on site, I always ask the same question: “WHY?” – and I rarely get a straightforward answer. Nobody wants to appear sanctimonious, but the reality is that most of the volunteers I speak to are altruistic and believe they can make a practical contribution towards alleviating a tragic situation that stems from the actions of the West in its involvement in disturbances in Iraq, Afghanistan and Syria. This blog is not the place to debate the veracity of that statement, but it is the place to consider how volunteers are contributing to dealing with the damage that has been done by destruction of people’s homes and livelihoods in these countries. These events have made thousands homeless and created widows and orphans whose future is bleak and unknown.

Could you be a volunteer?

When most people consider volunteering to work in a foreign country, they think about an established organisation like VSO [voluntary service overseas] Médecins Sans Frontierès, or one of the faith-based charities like Christian Aid or Samaritan’s Purse. Such organisations are efficiently structured and organised to provide a framework for the individual’s contribution to a project. However, working with refugees and migrants in Greece is a very different set-up. In fact, there is virtually no “set-up;” it’s all largely ad-hoc and random, constantly adjusting to changes in the local situation and endeavouring to keep up with the challenges that crop up from day to day.

It all starts with Facebook. Updates from volunteer groups on Facebook will tell you what is, and is not, needed, and if you want to take things further you can easily make contact through the PM (Private Message) system. What got me going was a photograph on Facebook of someone trying to chop up onions in a catering project, and the general comments about floods of onion-invoked tears. I told them I did not cry when I peel and chop onions and asked if I could help . . . . and the rest, as they say, is my developing story.

With a little bit of research, you will discover projects that could present an opportunity for you. A major part of your contribution will be a smile and a few cheerful words, the very things that are missing in a situation that is increasingly controlled by paramilitary police and the blundering interference of the European Union.

There is a real need for people who are able to commit to four weeks or more, but there is always a welcome for the tourist volunteer who takes a weekend break and brings a suitcase of specific, much-needed items or a cash donation collected by the local community in UK. Whether you come for a week or a month, you will almost certainly have to find your own accommodation, and the situation varies wherever you choose to go. I originally chose Samos because of the need for kitchen help, and the fact that there was accommodation provided for long-term volunteers. When the operation transferred to Athens, I changed my plans. I booked a cheap hotel for a few days and asked around if anyone knew of a vacant flat. I was very lucky and have a 3-month let on a tiny apartment on top of a housing block. My room opens onto a flat roof with a view across to the Acropolis on the horizon. This is surely an added bonus!

So, if you want to help, you are giving your time and you are supporting yourself both in terms of getting to Greece and in terms of somewhere to stay. The bonus of working in the soup-kitchen is that you won’t go hungry, but in any case, good food is available in simple, cheap restaurants.

On a philosophical note. . .

As far as I am concerned, there is only one true reason for being in Greece, Calais, Dunkirk or any of the refugee camps along the route: it is to be on the right side of history. I want my grandchildren to know that I decided to get involved and play my part; I want to set an example of putting beliefs and ideals into practical action, and I want them to remember that, when they are faced with the opportunity to take a stand at a moment in history.

I do not wish to sound pretentious, but I want to make some contribution to try and improve the situation of refugees in Europe. In the words of the 20th-century martyr Dietrich Bonhöffer:

If you would like to contribute to our running costs, please follow the link to my fund-raising page. Every penny goes to food, equipment and items needed by refugees on their journey. The fund is titled "Samos" but we have now moved to the mainland where we operate across and around Athens