It's a Man's Church

Rhian Taylor charts the ebb and flow of empathy for Philip North over his aborted appointment as Bishop of Sheffield. 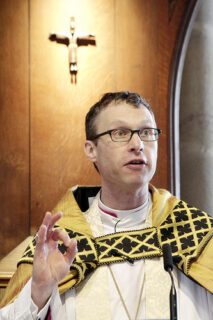 After considerable controversy Rev Phillip North resigned from his forthcoming appointment as the Bishop of Sheffield. This was due to criticism that as a member of Forward in Faith and The Society, organisations that don’t accept women priests and bishops, he would not be able to adequately support the clergy in Sheffield, a third of whom are women. The immediate response to his resignation seems to be a call to greater tolerance and a concern that this response has not shown enough tolerance to those of a traditional perspective...

On Sunday morning in my parish church, which is of a liberal persuasion, I listened to my vicar express his sadness about the resignation and make a passionate plea for more tolerance. It’s a compelling argument and one it seems very difficult to take issue with if you are of liberal persuasion. However, as I’ve reflected on this situation I wonder if it not as straightforward as it seems.

On the day of the resignation I watched with interest the media and Facebook fallout to the news. The people I saw reacting were unlikely to have agreed with Phillip North’s position on women but were truly disappointed about his resignation. What I noticed, however, is that the comments focussed on what a nice man he was, how well he got on with the women he worked with, and how it was a shame he wasn’t going to be able to utilise his skills and abilities in this role in Sheffield. In observing these comments what I was struck by is the connection between arguments that were often made in the past about racism: ‘She can’t be racist, she has lots of black friends.’; ‘he’s so nice to black people’.

We now know how inadequate these arguments are when we think about racism. Discrimination, whether it is racism or sexism is not just about our personal interactions, it occurs on a cultural and structural level too. In terms of the issue at hand- it’s quite possible for someone to be personally very kind and approachable to women, yet still be propagating cultural views that are diminishing of women as well as upholding and supporting institutional discrimination. I would suggest that this analysis might be relevant to Phillip North. On a personal level, he is kind and approachable yet he is a member of Forward in Faith an organisation that doesn’t believe women should be priests or Bishops. Their most recent publicity leaflet says ‘To be present when a woman presides at the Eucharist can be painful, because this visible mark of the Church’s disunity conflicts with the nature of the Sacrament of unity’. My understanding is Philip North will not receive communion if a woman is presiding. He also won’t receive communion if a male priest is presiding and they have been ordained by a woman.

But what do we do as people who find these views highly objectionable. I am aware that those in Forward in Faith justify their beliefs using theology, as of course people did with their racist world views. Does that make them untouchable to legitimate challenge? Why shouldn’t I name them as sexist views? People challenging the appointment have being strongly criticised for speaking up. There is a palpable sense that we are not being tolerant enough of the conservatives, and as Christians we should be tolerant to all. Phillip North has said he has felt personally attacked. That’s a real shame. These are nuanced arguments, and twitter, where everything is done in 140 characters, is not a place to express nuance. However, the line between the personal and public is a complex one. I also imagine that it would feel very personal to a woman priest in Sheffield if her Bishop refused to accept communion from her.

The narrative that we should be more tolerant is a very effective tool for reducing dissent, particularly when used with women. We have been socialised from early childhood not to upset people; to be kind; not to express our anger. It’s a narrative which silences us. Even as I write this, I am acutely aware of who I might be upsetting.

It is very noticeable to me that the level of empathy for one man’s situation is so much stronger than the level of empathy for the many women. This is an indication of just how patriarchal this institution still is. It is extremely difficult for women to work under a Bishop who denies the validity of their vocation. I know enough women who have had been in this situation to know how undermining and diminishing this can be, not just to their career, but to their whole personhood. I wonder if people see how ironic it is that there is so much dismay that Philip North is missing out on using his talents as Bishop, without considering that it is the impact of traditionalists views that have led to several generations of women facing similar restrictions and disappointments.

It’s always worth being very cautious in saying what Jesus might have done in a situation, but what strikes me about many gospel stories is that Jesus was known for being challenging rather than being tolerant. He didn’t tell the Pharisees that he wanted their mutual flourishing; that his disciples should not upset each other and that they should all work on things slowly together. Jesus called them out on wrong thinking and wrong actions. He was provocative. He was forward thinking. He turned over the tables in the temple.

The reality is we are not endlessly tolerant to all views, nor should we be. We have moral standards and we draw lines beyond which the right thing to do is to challenge and stand up for what we think is right. As a society, we are no longer tolerant of racist views, and neither should we be of sexist ones. I feel embarrassed to be part of a church which seeks exemption from the equality laws of our country, and I wonder how the church will ever be relevant to this generation when it continues to do this. No-one likes giving up power and privilege: that is why legislation can be helpful in ensuring people move forward. The real responsibility for the situation in Sheffield lies with those who made this appointment, not with Phillip North himself. However, in my view it is the right outcome that he will not be Bishop of Sheffield.

Rhian Taylor is a university lecturer and attends a PCN local group.

Image: Bishop Philip North preaching at his installation as Bishop of Burnley. Credit: Church of England in Lancashire