A meditation for the Feast of the Transfiguration - Tuesday, August 6, 2019 Anniversary of the Bombing of Hiroshima 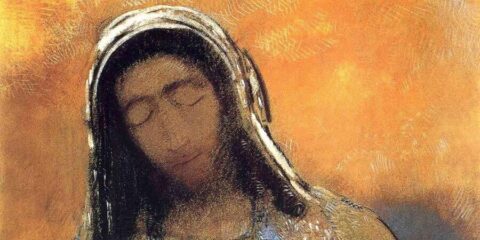 Dom Bede Griffiths (1906–1993) was born in Britain and lived the latter decades of his life in India. Some of our Living School students have been deeply moved by studying his work which sought to make connections between Christianity and Hinduism. It has not diminished but rather expanded their faith. Robert Ellsberg describes Griffiths’ journey to God through both Western and Eastern spirituality: In his old age [Griffiths] looked every bit the part of an Indian holy man—with long beard, flowing white hair, and saffron robe. But while he felt equally at home in the [Hindu] Vedas and Upanishads as in the Christian Scriptures, he remained thoroughly rooted in the church. He had come to the point where all religions, indeed all creation, spoke to him of Christ. . . . [A theme I explore in my book The Universal Christ.] After his graduation [from Oxford] . . . Griffiths began to explore the world of faith, stimulated at first through his reading of Dante, St. Augustine, and the Bible. . . . Eventually he visited Prinknash Priory, a Benedictine monastery, where he believed he had found his true home. . . . Upon receiving the robe of a novice he took the name Bede and went on to spend the next twenty years in conventional monastic life. In 1955, however, . . . an invitation arrived to help establish a Benedictine monastery in southern India, and Griffiths impulsively volunteered. Some instinct had made him believe that in India he would discover what he called “the other half of my soul.” . . . What struck Griffiths [about India], apart from the staggering poverty, was the profoundly religious atmosphere—what he later called “a sense of the sacred”—that seemed to permeate the air. He had come in some sense as a missionary. . . . But he soon came to believe that the secularized West had much to learn from India. Increasingly, his mission was to witness to the “marriage of East and West”—attempting to facilitate an encounter between Western rationality and the intuitive spirituality that remained so much a part of the Indian soul. . . . In Kerala Griffiths helped to establish a monastic ashram—a community faithful to the monastic tradition, while adapting its form to Indian culture. . . . He experimented with yoga, meditation, and other Indian spiritual disciplines. He also immersed himself in the study of Vedanta and the Hindu religious classics. His study confirmed his faith that Christ represented the fulfillment of the religious quest. But just as the church had discerned the mystery of Christ hidden in the religious history of Israel, so it was possible and necessary to discover the face of Christ hidden within all the religions of the world. . . . This was Griffiths’s life project and his passion. At the same time, Griffiths believed, the Hindu world had much to teach the West. India had preserved a religious depth, an appreciation for interiority, that was so often effaced in Western culture. A true dialogue between East and West would help seekers in both cultures to travel “upstream,” [to what Cynthia Bourgeault calls the “headwaters” of the world’s religions—RR] to find their way to a deeper dimension of reality in which all religious paths might ultimately converge.