This is the second of three articles for Interfaith Week written by PCN members. Its author, Howard Grace from Newbury, is co-founder of the West Berkshire Peace and Integration Forum. 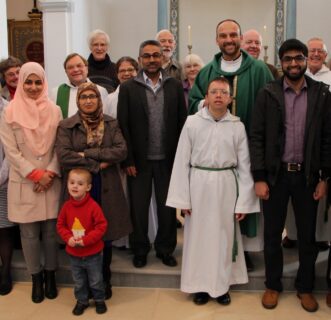 “We all know the word “orthodoxy”: it comes from a Greek word that means correct belief. But there’s a less familiar word, “orthopraxy” which comes from another Greek word ‘praxis’, which means action.”

Becoming involved with PCN over the past dozen years has greatly helped to clarify my thinking on a wide range of doctrinal issues. I have also been involved with interfaith discussions where, hopefully, we get to understand each other better. But what has proved most fruitful for me due to decades of work with, and commitment to Initiatives of Change, is getting into common action: Orthopraxy’.

On a local level a simple example of common action was when Newbury Buddhists approached the Quakers (of which I am one) to go litter picking together. Firm friendships were made, as well as making a small practical impact.

Newbury is a rural area, and not very multicultural. But we feel it is equally important to build intercultural relationships here as in big cities. So, several of us from different faiths and cultures, founded the West Berks Peace and Integration Forum. We have held a wide variety of events, including a cricket match, for the men. Meanwhile, the women (some in hijab's) and children had a great time playing rounders. Bring and share meals are also popular. Such initiatives have built friendships upon which more serious subjects can be engaged with.

Initiated by the Forum, last month the Mayor and deputy Mayor of a neighboring town joined fifty people to explore "Do I demonise ‘the other’? If you had walked the life journey of the other would you have acted that way too?" Marina Cantacuzino founder of the Forgiveness Project, http://theforgivenessproject.com/about-us/founder was our keynote speaker and set the scene with many poignant examples where the key to the way forward was for adversaries to walk in each other’s shoes.

Then came four panelists who shared their practical steps towards community building following potentially polarizing experiences. The first was Jacqui Daukes who was caught up in the 2005, 7/7 London underground bombings. She has since continued her path to bring healing by training as a mediator. She says,

“I still don't like travelling between King's Cross and Russell Square by Tube. I will always remember 7/7 but then and now I don't blame Muslims. I'm interested in peace and find inter-religious dialogue and action inspiring in this context.”

We then heard from Musa Aliyu a Nigerian Muslim who expressed how, at the time of those same bombings, he had been a PhD student in London. He described meeting me and our deciding to go to UK Sixth Forms together as a contribution to countering the growing atmosphere of polarisation and Islamophobia at that time. One story Musa told in sixty Sixth Forms was that during the Nigerian conflict, in which over 50,000 people were killed, he had worked as a journalist. At one point, as he covered a story, right before him a Muslim mob attacked a Christian girl. It looked like she would be killed. Musa abandoned his camera and notepad and intervened. The girl was saved but in the process Musa’s arm was broken and he was nearly beheaded. For the following two years he felt traumatised. Experiences such as these led to his deep conviction to play a part in reconciliation and community building, and to do his PhD exploring the role of the media in this. His conviction clearly made a big impact in Sixth Forms around the UK, as it did as he shared it in our recent Newbury event.

Musa's brother, also a Muslim, was killed by Boko Haram a couple of years ago. Musa has recently returned from Nigeria where he has been gathering material to finalise a book he is writing on Boko Haram. As well as lecturing at Coventry university, his life is dedicated to fostering justice and healing in the wider world.

Two other local speakers were a leader of an evangelical church, and a young Muslim woman who shared her inner struggles of growing up in a predominantly different culture to her own. The contrast between these two experiences was a vivid example of listening to the story of ‘the other’.

One of those present in our meeting (for the first time) had spent some years in Cambodia doing NGO work. Whilst there he had seen the documentary film The Cross and the Bodhi Tree which portrays the extraordinary spiritual journeys of Father François Ponchaud, a French Catholic priest, and Mother Rosemary, an English Anglican nun. They reflect on their deep encounters with Buddhism, in Cambodia and England respectively.

On the initiative of this man, our next PI Forum event, in December, will be a screening and discussion around this film. A Muslim leader wrote,

“That's a fantastic idea I am all up for it.”

A couple of weeks ago, the minister of our local Anglican church e-mailed me with a suggestion to mark the Week of Prayer for World Peace. This led to him and me attending Friday Prayers with the local Muslim community, and six of our Muslim friends (from the Peace and Integration Forum) attending last Sunday's service in his church. A really poignant initiative. Please see attached photo (which I took, so am not in the picture). An article appeared prominently in last week's issue of The Newbury Weekly News under the title: 'Muslims and Christians unite to show solidarity'. So, this positive message is getting out there.

Our exploration in interfaith orthopraxy continues!