In Honour of Marcus Borg 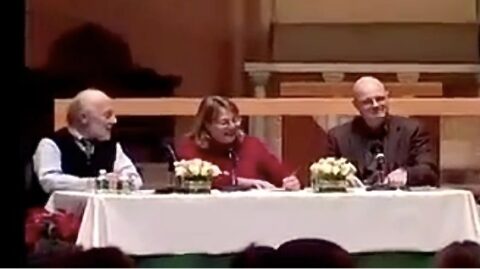 What a pleasure to have known Marcus Borg. What a kind and beautiful human being. What a loss to us all.

I originally heard of Marcus through his association with the Jesus Seminar, which, in the Evangelical circles I hail from, was not a good thing. My first direct encounter with his writing came through a dialogue book he did with N. T. Wright. Again, my background predisposed me to disagree with him and dislike him, but he made it hard to do either, especially the latter. Hardly the hard-bitten “liberal theologian” out to eviscerate Christianity of any actual faith, he impressed me as a fellow Christian seeking an honest, thoughtful, and vital faith, ready to dialogue respectfully with people who see things differently.

We were featured speakers together on several occasions, and from our first contact to our most recent email exchange a few months ago, Marcus was a gracious gentleman, a Christian brother, and a genuinely friendly colleague. He never asked to what degree I agreed or disagreed with him; he made it clear that his acceptance of me was not dependent on agreement and that his heart and hand were equally open in similarity and difference.

Some friends of mine wrote about Marcus somewhat uncharitably on a few occasions. I remember a dinner where he asked me many questions about them, utterly non-defensive, sincerely trying to understand where they were coming from and how he could still seek common ground with them, something I wish his critics had done more earnestly with him.

Once several years ago, Marcus, Diana Butler Bass, and I spoke together for a few days at Harvard, (pictured). Two memories stand out.

First, on one Q & A panel, nearly all the questions about theology and Christology were directed to Marcus, the questions about church history and trends went to Diana, and the questions about pastoral work and spirituality went to me. Near the end of the panel, a question on prayer was directed - predictably - to me. After I responded, Marcus spoke up. “I pray too!” he interjected, and shared some tender and meaningful reflections on his own prayer practice. I was deeply touched that Marcus didn’t want to stay in the zone of theory, as important as that is, but wanted to talk spiritual practice as well.

Immediately after that panel, lines formed with people asking Diana, Marcus, and me to sign their books. My line, being the least popular, left me standing there somewhat awkwardly for long periods, but it also gave me the chance to eavesdrop on what people were saying to Marcus. Person after person said almost the same words, “If it weren’t for you, I wouldn’t be a Christian today ... I dropped out of church but came back after I read one of your books ... I’m still a Christian because of you ... I became a Christian because of your books.”

Their effusive comments brought me back to the Evangelical revival meetings of my childhood where people “testify” to how they were “saved,” how they once were blind but now see, how they saw the light and were born again. I remember thinking to myself, “Well, it turns out that Marcus Borg is an evangelist too, just in another way and to another community of people.”

In a recent email, understanding the severity of his illness, Marcus wrote, “I have always known that we are all on death row. Never would have gotten that wrong on a true-false test. But it’s different to know it.” Still, he said, “in the midst of all this ... I am unreasonably happy. Not all the time. But more than I might have expected.”

My prayers and thoughts go out to all Marcus’ family and to his wide circle of friends. May those of us who remain carry on his good work of helping people seek an honest, thoughtful, and vital Christian faith.

Marcus Borg did justice, loved kindness, and walked humbly with God. I miss him deeply, honor him warmly, and will always remember him with great respect and gratitude.

This blog by Brian McLaren first appeared on his own website on 22nd January 2015 and is reproduced here with his permission. More McLaren blogs