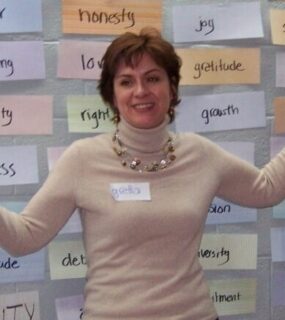 ​This article is by Becky Garrison and appears on the FaithStreet website where you can read the full interview. Gretta Vosper will be speaking at events in London and Oxford later this month.

Gretta Vosper describes herself as both a minister and an atheist. That may sound like an oxymoron to some, but her work and witness offer a model that speaks to those who no longer believe in the orthodox Christian concept of “God” but still seek the community present in church cultures.

In 2009, Vosper founded the Canadian Centre for Progressive Christianity. Prior to her official “coming out” as an atheist in 2012, Vosper was threatened with two heresy trials, but she continues to serve as the pastor of West Hill United Church in Toronto, Canada.

I spoke with Vosper about her faith journey and her perceptions regarding the future of the “Christian” church.

How do you respond to those who say you’ve lost your faith?

I haven’t lost anything. I’ve just learned to describe what I believe in terms that are grounded in everyday language and not cloaked, and so potentially misinterpreted, in archaic, exclusive language. My theological training exposed the Bible to me as a construction of human beliefs. My faith development, growing up and in theological college, instructed me to live in accordance with an ethic grounded in love and compassion; I still live that out. I simply no longer think of it as the exclusive purview of a Christian ideology. It never was and it shouldn’t be.

Your most recent book, Amen: What Prayer Can Mean In a World Beyond Belief, begs the question: How do you pray if you’re not religious?

Prayer, for me, is being attuned to the world, to what is happening within me in response to that world, to my partner, my family, my neighbors. If I lose touch with those things, it would do me no good at all to pretend I have a conduit to a spiritual being somewhere else; I’d have lost hold of everything that has meaning to me. If prayer is only that, then, only a connection with a divine being, then I think it provides a mere masturbatory function on a “spiritual” level, a high that is good for one but of little or interest to or of little impact on anyone else.

Why do you remain a minister in the United Church of Canada even though you are an atheist?

I believe that the church has much to do that is positive in community and in the world and I want that to be salvaged. If I didn’t think so, I’d leave.

I founded the CCPC to help create a network for people who were tragically isolated because of their beliefs, who felt they had no one to talk to or that they would lose their friends and families if they shared their beliefs. All of those people had a background, a deep connection, with the Christian church and, for the most part, it was contemporary Christian scholarship that had illuminated their thinking.

I wanted to challenge the church to allow them some space, to recognize that they were part of the Christian story, just a different strain — and one that, in my opinion, is more honest that most liberal iterations.

To read the rest of this article please go to the FaithStreet website.

The Progressive Christianity Network Britain seeks to offer new vision and understandings of faith for this third millennium. We are unafraid to ask the big questions about doctrines and tradition and to engage with a wide variety of religious opinion. Gretta Vosper will be speaking at two UK events that PCN Britain has helped to organise in September 2014. There is a London lecture at 7.30pm on Wednesday 24th September and a weekend conference in Oxford from Friday 26th - Sunday 28th September.