How I fell in love with Modern Church

Julian writes about how he found his way to PCN's partner organisation Modern Church. 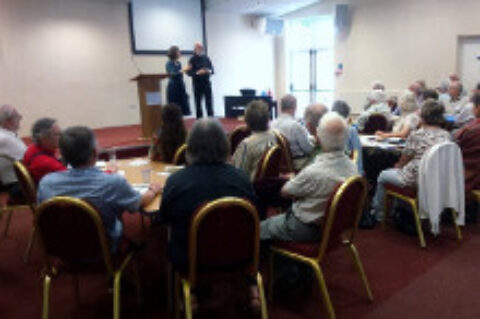 29-31 Jesus said, “The first in importance is, ‘Listen, Israel: The Lord your God is one; so love the Lord God with all your passion and prayer and intelligence and energy.’ And here is the second: ‘Love others as well as you love yourself.’ There is no other commandment that ranks with these.”

I re-started being a Christian at the age of thirty, after over ten years of having limited interest in Christianity.

In my late twenties, I started attending twelve-step recovery meetings patterned after Alcoholics Anonymous. I had struggled with an eating disorder and mental health issues since childhood, and sought all kinds of professional help.

Starting the twelve-step programmes opened me up to a very different approach to my problems. These programmes were ‘adapted’ from Christianity in the 1930s onwards. They see spiritual growth as the solution to all kinds of addictions and mental/emotional health issues. They explicitly teach that God is personal to all of us, and that we can (and must) develop our own idea of who and what God is. They even encourage attendees to be atheists and agnostics if that is how they view themselves.

This permissiveness and open-mindedness allowed me to engage with Christianity in a very different way ‘the second time around’. I started by attending a very evangelical church for two years and got a lot from it. I still find evangelical churches wonderfully welcoming places, where love is seen as more important than intellectualism (which I still agree with).

I always thought the important stuff in Christianity was the values and the way we live our lives, rather than beliefs and creeds. See my blog https://iwlwood.wordpress.com/2016/05/01/the-95-we-all-share/

My next step was Quakerism, which I love for its open-mindedness, acceptance and social/political engagement. I also spent a few years as a Unitarian, which is a wonderful place to explore different faith paths.

Over time, I wanted to explore reflective, thoughtful Christianity, which led me to progressive and liberal Christianity. I came across the Progressive Christianity Network (PCN) at Greenbelt (the last time it was in Cheltenham), and am now an active member of a local PCN-affiliated group here in Bristol.

A friend from the Unitarians told me about Modern Church two years ago, and I managed to book a place at the last minute on last year’s conference. It was a great theme- ‘Seeking the Sacred: Christianity in dialogue with other religions and the world’. This included worship from all faith traditions. This felt really exciting, praying and worshipping in multi-faith ways with Anglicans. But for me the highlight was meeting eighty or so new people I had not met at PCN or elsewhere who were open to other religions and exploring their Christianity. It was also inspiring to meet so many vicars, academics and church attenders who were giving so much to their local churches, and to the Modern Church movement.

This year’s conference was on Shakespeare- ‘Performing the Faith: Shakespeare and Theology’, and featured many inspiring speakers from within Anglicanism and academia, and Rowan Williams. Above all, it was the company I enjoyed the most, and the excitement that I’ll be going back next year too.

A Christian Quaker, who passionately believes in Christianity's value