How I Become a Heretic - with help from Jesus

The title of this blog is the title of a PCN conference that Robin Meyers will be leading in Bristol in May. Here he sheds some light on his spiritual journey. 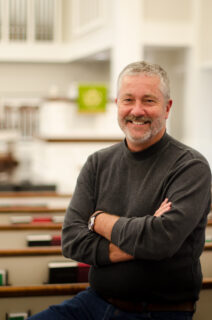 I was a tow-headed twelve-year-old preacher’s kid and Sunday school was not optional. My teacher was Mr. Nigh, a salt-of-the-earth but slightly grim Calvinist holding forth in a stuffy classroom at the Riverside Church of Christ in Wichita, Kansas. He was teaching us about forgiveness, expounding on Peter’s question to Jesus in Matthew 18:21 about how many times a person should be expected to forgive another person before the warranty runs out. My mind was elsewhere....

It was 1964 and The Beatles were coming. President Kennedy was buried beneath an eternal flame at Arlington marking the end of Camelot. The Warren Commission reassured us that Lee Harvey Oswald acted alone. Nelson Mandela had just been thrown in prison, and Congress passed the Gulf of Tonkin resolution to give cover to an escalation in the Vietnam War. Three civil rights workers were murdered in Mississippi in the time it took to sneak a peak at the latest issue of Playboy. On my father’s desk was a copy of Bishop John A.T. Robinson’s explosive little book, Honest to God. The earth seemed to be moving under everyone’s feet.

Everyone that is, except my Sunday school teacher. He was explaining Jesus’ answer to Peter’s question as if there was nothing particularly unusual about it. ‘Seventy times seven really means an unlimited number of times,’ he told the class. ‘Peter was looking for a number, as if human beings can calculate the mathematics of forgiveness. Jesus will have nothing to do with placing limits on forgiveness. Any questions?’

The class was silent, which was nothing new. We were, after all, a clammy and restless collection of bony pre-adolescents who did not want to be there to begin with. Mostly we were collecting gold attendance stars in what other students complained was a rigged contest—given that I lived in a parsonage next door to the church. Besides, who wants to argue with Jesus?

Mr. Nigh paused to look up at us over his thick glasses. I suddenly realized that not only did they make his eyes huge, but they were speckled with tiny white flakes of dandruff. He repeated his question as if perhaps we had missed the radical nature of the text. ‘Unlimited forgiveness boys—that is the lesson. Any questions?’

That’s when it happened. That’s when I realised that I did have a question. Who knows where it came from, or why I felt compelled to ask it. Maybe the idea of unlimited forgiveness sounded good, but did it apply to Hitler? I also knew that Mr. Nigh believed in a literal heaven and hell, and that all of us would spend eternity in one place or the other. That’s why the question seemed so obvious to me, although I felt my face grow hot when I asked it.

More silence. I immediately regretted what I had said. I’m sure it sounded flippant and besides I was just a kid. But it didn’t make sense to me, and my assumption was that God is at least as logical as I am, not less. What’s more, I wanted Mr. Nigh to know that like all good Church of Christ kids, I was taking the text seriously.

When he finally got around to saying something, Mr. Nigh offered that familiar explanation heard countless times in the church when something doesn’t make sense, even to a child. ‘It’s a mystery Robin. Perhaps it is not for us to question God, but to have faith.’

As we gathered up our things and shuffled out of class, it was dawning on me that certain religious questions could not be asked, especially if they were about God. More questions followed, of course, as did more answers that made no sense. Then I learned that if you ask too many questions, they start calling you a ‘doubting Thomas.’ Yet we are commanded to love God with all our heart, soul, and mind. So if things don’t make sense, we should say so, and be willing to think in new ways. Including the ways in which we were all raised to think about God, talk about God, and communicate with God.

Above Us Only Sky

What has changed since the mid-twentieth century is the willingness of people to discuss the last taboo: theism itself. If not the death of God, then the death of patience when it comes to outdated models, and to many, offensive language about God. Parents expect every child to outgrow myths about Santa Claus and the Tooth Fairy, but the Invisible Holy Father from childhood remains. Taught to use critical thinking and evidence-based reasoning in all other matters, countless adults are asked to partition their brain when it comes to religion. Otherwise reasonable adults now find it difficult to admit that ideas about God left over from antiquity makes it impossible for them to go to church, synagogue, or mosque. They live a quiet lie that they are ashamed to admit: that going to religious services means believing things they know are not true in order to get rewards they doubt are available.

Meanwhile we still pray as if involved in a transaction with a divine agent. We still give thanks to God when someone is spared in a plane crash no matter how many others perish. If God is in the business of saving one, then why not go ahead and save them all? We still talk about ‘no atheists in a foxhole’ as if God is the Rescuer of Last Resort. God is a personal bodyguard for some, an angry hit man for others. This selective providence makes God into a capricious monster, assumed to act on behalf of the chosen child while implying that other children deserves to die.

Meanwhile in our political life, our protest rallies are littered with signs that turn God into a political partisan, saying hooray for our side. As it turns out, belief in God and Willy Loman have a lot in common. When a critic was reviewing Arthur Miller’s powerful play, Death of a Salesman, she wrote, ‘we watched an aging, defeated traveling salesman move inexorably toward self destruction, clinging desperately to fantasies.’ She is talking about Loman, of course. But today she could also be talking about orthodoxy views of God.

Everywhere we turn these days, someone is making a claim on behalf of a Deity that we rightly confess is beyond knowing or naming as if God is our next-door neighbour. Countless believers talk about the Almighty as one would talk about a vending machine, a rich uncle, or a lobbyist. The shameless way in which human beings conscript God for their own selfish purposes has done as much damage to the idea of God as the problem of evil itself.

The Ground is Shifting

For two millennia, Christian theologians have made Jesus the focus of their work, and rightly so. Defenders of orthodoxy as well as those who seek to recover the historical Jesus have produced countless resources. But where does one go these days to have an honest conversation about what in the world people mean when they use the word ‘God’ in the first place? Or Yahweh or Allah, or whatever name is used in any religious tradition for the divine? We argue over whether Moses wrote the Pentateuch, whether Jesus was divine, or if Mohammad was really channelling words outside of himself. But we stop short of questioning the First Cause to begin with. Now we may be entering a time in which the questions will be more about God than about the prophets of God. More about what is revealed than about the revealer. It is almost as if there has been a kind of quiet conspiracy growing among people who struggle to be spiritual but cannot escape the most important question of all: What if the God of all our traditions does not ‘exist’ as other things exist? What if, in fact, the idea of God ‘existing’ at all is absurd, but not the only option?

Robin Meyers will be giving the second Marcus Borg Memorial Lecture at Bristol on Saturday 13th May. He will also be speaking in Newcastle on Monday 15th May where his talk will be entitled, 'Spiritual Defiance: Building a Beloved community of Resistance’. Follow the links to get the full details and to book a place. Other talks are being planned including London. When we have more in information we will publish it here. You can also email us to ask to be notified when the details are posted.