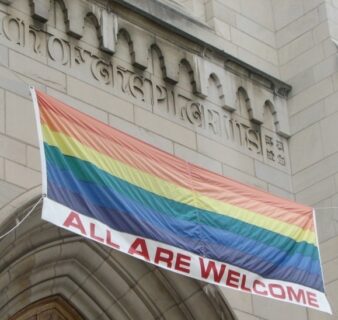 The United Kingdom has become a remarkably more tolerant and inclusive nation in matters of its citizens’ sexual orientation than we might have envisaged twenty years ago. A Tory government introduced changes in the marriage act to allow same sex marriage. The support of LGBTQ people and the fight against discrimination can be seen throughout the mainstream media, in employment legislation, in greater sensitivity in schools, at FA football grounds and other sporting venues...

Yet in the established Church of England and in other Christian denominations there is still much work to do if the inclusive love of God, seen in Jesus, is to be experienced as a reality for all people who might look to church communities for help, support and affirmation.

In 2003, PCN Britain adopted the Eight Points of our originating source, the USA Centre For Progressive Christianity. In those eight points, made into a welcome poster to be put up at the entrance to a church, point 4 invited “all people to participate in our community” and specifically mentioned those of “all sexual orientations and gender identities.” Few churches agreed to display the poster. Too strong an affirmation to swallow? Sadly PCN Britain in wanting to revise the eight points decided to lose point 4’s specific examples. I argued at the time they should be kept and I feel even more strongly about this now that we have received this copy of a challenging open letter, sent by a PCN member to her church.

The letter raises the central and vital point that it is no good any church saying they are inclusive and welcoming if they are afraid to make that public. We can debate how we interpret biblical texts, we can think that we are all really nice in our own church and would never want to be seen to be homophobic. That’s not enough. Churches need the courage of some convictions about what the inclusive love of God really means. The Jesus of the sermon on the Mount didn’t pussyfoot around! And there are many ways in which every church which deems itself to be progressive, liberal, open, (choose your own description), can take steps to flesh this out, as the letter suggests. So be challenged by this read and lets began some debate!

To all members of the PCC,

In December 2014, a Manchester inquest heard that a Didsbury teenager, Lizzy Lowe, took her life because she dreaded telling her parents she was a lesbian, and she thought that her church wouldn’t accept her. She was 14 years old. At the inquest her parents said how, if they had known she was gay, they would have affirmed and supported her. Her vicar said the same about the church - it would not have condemned her as she feared, it would have been accepting and positive. Yet Lizzy didn’t know this. This was not a church preaching negativity about gay people, as some still are, but it was a church that was silent.

This story is relevant to us in this church because in my experience we are also a church that is silent on the issue. My personal guess is that there are very few people in this church who would take the view that homosexuality is a sin, and that LGBTQ (Lesbian, gay, bisexual, transgender, queer and questioning) people shouldn’t receive fair and equal treatment. If people do take this view, I am happy to have a scriptural debate with them, however, I don’t think this is the issue for us. I suspect that people here are privately very supportive of LGBTQ people. Yet, in my many years of being here, I have not heard any public affirmation for gay Christians or condemnation of homophobia, and there is nothing on display which would indicate any welcome or positive imagery for our LGBTQ brothers and sisters. I am not saying that this has never occurred, but it must have been sufficiently low key for me not to be aware it.

When some churches are openly condemning of gay people, it is really important that our support is public, rather than just private. How would someone know that they might be welcomed here? Should they have to come for several months slowly getting to know people, hoping that they are not going to be rejected? This year, when the town’s Pride march occurred, people ended the march sitting on the green overlooking our church, yet we didn’t offer any obvious support. On a number of occasions over the years, I have mentioned joining an organisation, ‘Inclusive Church’, which is one way a church can register that it would be supportive and welcoming of LGBTQ people. I was told that whilst people would not be against the idea, now wasn’t the right time. Lizzy Lowe’s death has challenged me to think I should have pushed harder. The need for churches to address this issue is an urgent one rather than one that can be postponed.

Public affirmation is important in these circumstances because of the really damaging effects of homophobia, particularly to people’s mental wellbeing. As a lesbian friend once said to me, she didn’t need people to abuse her in the street to feel full of shame about being gay. She had been imbued from early childhood with the feeling that she was abnormal, that the way she loved, the people she loved, was something to be subdued and hated within herself. Thank God this is now rapidly changing in society and we have reason to hope that our young people are growing up in a more accepting and positive culture. Unfortunately for LGBTQ Christians the story is not so positive. The church is still publicly dithering about whether it is OK to be gay or not. Gay and lesbian clergy are supposed to be celibate, even when, like Rev Jeffrey John, they are in civil partnerships: a policy that seems to me to be as illogical as it is cruel. Gay and lesbian people still can’t get married in churches. Some churches are still publicly condemning homosexuality as a sin, declaring God’s wrath and hell fire on people in gay relationships.

At the Greenbelt festival this year the Church of Scotland Minister, broadcaster and leader of the Iona Community John Bell, publicly came out as gay citing Lizzy Lowe’s suicide as his own reason for this disclosure. What struck me most about this is that it if it was difficult for John Bell, who is 68 years old and incredibly articulate, outspoken and free thinking, how can we expect other Christians, especially our young people, to do this without considerable affirmation and public and private support.

So, what can we do? I don’t have all the answers but I have some ideas. We could join one of the organisations that supports LGBTQ Christians and campaigns for change in the church. This could be Inclusive Church or One Body One Faith, which is the new name for the Lesbian and Gay Christian Movement. We could offer financial support to LGBTQ charities: some support young people with phone helplines, or have refuges for those who are made homeless. We might want to become involved in next year’s local Pride event. We could have obvious public signs up in our church or on our pew sheets to show that we are welcoming, affirming and supportive of LGBTQ people.

We might need to do some reflection. It is not at all surprising that most gay people won’t go near a church. The homophobia from the church has been so severe and damaging that repairing the hurt and rejection that has been conveyed is likely to take decades; but we should start somewhere. Inclusive Church offers a four week course for churches called Radical Welcome. This could be a good way to involve our congregation in reflection and a potential change of approach.

The philosopher Edmund Burke, famously said, ‘The only thing necessary for the triumph of evil is for good men to do nothing’. Homophobia is an evil in our church and society, and I really hope that we do all we can to stand against it, supporting LGBTQ Christians to live with the authenticity and equality that helps us all as we struggle towards wholeness in our Christian lives.

Image by Drama Queen (Church of the Pilgrims) [CC BY 2.0 (http://creativecommons.org/licenses/by/2.0)], via Wikimedia Commons