Extremism - a perspective on the religious factor

There are many factors which lead people to extremism. Howard Grace considers one of them, the belief that scripture demands they serve God in this way. 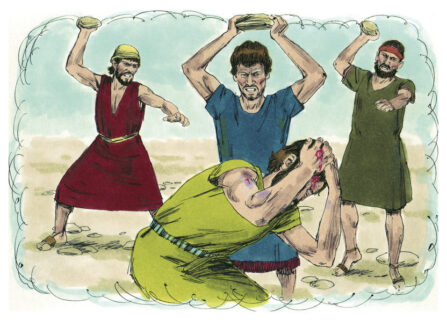 Many people in the world, including Muslims, are appalled by the barbaric actions of Daesh. How can people think they are doing this in the name of God? But this might also make us reflect on what it means when Christians refer to the Bible as the “Word of God”. What kind of God is reflected in passages like Deuteronomy 7, v 1&2.

“The Lord your God will bring you into the land which you are going to occupy, and he will drive many nations out of it. He will drive out seven nations larger and more powerful than you: ... When the Lord your God places these people in your power and you defeat them you must put them all to death. Do not make an alliance with them or show them any mercy. Tear down their altars, break their sacred stone pillars in pieces ... burn their idols.” (Good News Bible.)

Is this really God commanding? Maybe these seven nations were judged to be worshipping false Gods or living ‘immoral’ lives. Yet does this ruthlessness not feel similar to what Daesh adherents are engaged in now, thinking they are obeying God in seeking to establish a Caliphate and to confront Western immorality?

The great majority of religious people wouldn’t dream of taking their beliefs to such extremes. Nevertheless, many do think of their holy books as “The Word of God”, which is in some sense to be obeyed and followed. This is a basic premise upon which all else is built. It is worth briefly exploring this in wider context.

From a Christian point of view some use words like ‘infallible’ and ‘inerrant’ to describe the Bible, as if God had somehow dictated it. But for others there is a quite different, approach. Through the centuries many scholars (and more recently theologians like Marcus Borg) rather than seeing the sacred writings as being God's witness to the nature of the Divine perceive them as coming from human beings as they wrestled to make sense of how God was working in their history, and in their own lives. Thus the Bible is seen as those writers’ witness to God - from within their particular cultural, social and philosophical context - rather than God’s eternal witness to God.

I recognise that Muslim friends, who perceive the single record in the Qur’an to be the exclusive revelation to the Prophet, might find such an understanding of their holy book more difficult to contemplate. But a good starting point for all of us could be to humbly recognise that our human mental capacity to comprehend dimensions beyond our everyday is very limited. Thus, as we struggle to seek answers to the big mystical questions, metaphors, parables and other similes are employed to give insight to deeper non-literal truth.

There are great riches in all our holy books. From a Christian perspective I know that throughout history millions have been inspired to selfless acts. But it is also true that people have suffered appallingly at the hands of Christians who have claimed to act in the name of God. And even today the Bible is scoured by some as if it will reveal God’s will to us on all sorts of issues if only we can find the right way of interpreting it.

For instance, some quote various passages of scripture as if they reveal a Divine command about homosexuality. Such an approach often merely reinforces the writer’s own negative feelings towards the subject while adding to it the authorization of God. Yet, if such passages are understood instead as a product of man’s searching for explanation in the context of earlier and pre-scientific centuries it gives us freedom to adopt a different perspective. It will be recognised that human understanding can develop with time, experience and reflection, just like it has towards diverse issues such as slavery, the role of women, or the earth being the centre of the universe. It also enables us to view passages such as Deuteronomy 7, quoted above, through the lens of human cultural development. Thus we are not forced to accept as a definite command of God something which our own culture has long since transcended and even abhors.

So, if nothing else, modern day atrocities in the name of religion should make us reflect on the true nature of our holy books. If we can understand that rather than being dictates of God the scriptures reflect the quest of ancient peoples to see their lives in the context of the Divine, it would allow for a primary focus on the spirit of love, compassion and integrity, which most would perceive as the spiritual heart of our holy books. Importantly, it might also help us be more confident in addressing religious aspects of extremism.