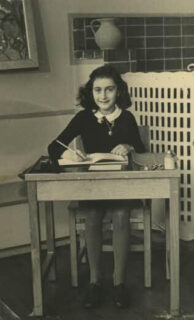 I was recently at a church event where the speaker described the work of his organisation to evangelise and convert Jews to Christianity. His approach seemed to me to be very contentious.

He talked a lot about their work in Amsterdam. As it happens my wife is Dutch, and a few days earlier we had been to see a play about Anne Frank in which one of our Quaker friends was a cast member. This Dutch, Jewish girl and her whole family hid for two years during the war before being discovered and sent to Nazi concentration camps where they suffered terribly, and died.

So, at question time, in an attempt to delve into the speaker’s doctrinal beliefs, I mentioned this play. I then recounted being at a church a few years ago where the pastor had said that, like many other Jews who were sent to holocaust camps, Anne Frank had encountered hell on earth. But that was nothing compared to the eternal hell she went to because she was not a Christian. I asked the speaker whether he agreed with the view of that pastor. He said that some people may decide for Christ at the last moment so would be ‘saved’. But when I pushed him further he said that he did indeed believe that Anne Frank would have gone to eternal hell because she wasn’t a Christian. “That is what The Bible says.”

There is no point in going into doctrinal discussion here because that would be never-ending. For millennia, far more learned people than I have debated biblical interpretation. But I would just say that if my thought process had led me to believe that, because all non-Christians go to hell that will include people like Anne Frank, I would be compelled to stand back and consider how I had managed to get to that point of belief.

If we think of having the right set of doctrinal beliefs as the crucial aspect of Jesus’ way, the internal dynamic of the Christian life becomes ‘meeting requirements’. But during Jesus’ ministry he took strong issue with Pharisees who made ‘living by certain rules’ the requirement of acceptability by God. I suspect that in the present time Jesus would have confronted, just as strongly, the belief requirement of ‘correct doctrine’ as the route to salvation.

I am reminded of the phenomenon that if a frog hops into a bowl of boiling water it immediately jumps out again. But if the frog is placed in a bowl of cold water that is slowly brought to a boil it just stays there with inevitable consequences!

How can a person like the speaker referred to above, step by step, come to the boiling point of believing that Anne Frank and millions of other ordinary people, spend eternity in hell, just because they hadn’t come to certain theological beliefs? The troubling thing is that many people continue to be alienated from the life that Jesus exemplifies for us, by being presented with such unbelievable doctrines as part of the Christian package.

Though not a Catholic, I resonate with Pope Francis who maintains that if the choice comes between doctrine and compassion, we should choose compassion. That sounds to me just like the sort of thing that Jesus might have said.