Creating a world beyond the beliefs that divide

Gretta Vosper has been in the UK making a case that theistic language has become a stumbling block to the most important aim of Christianity. 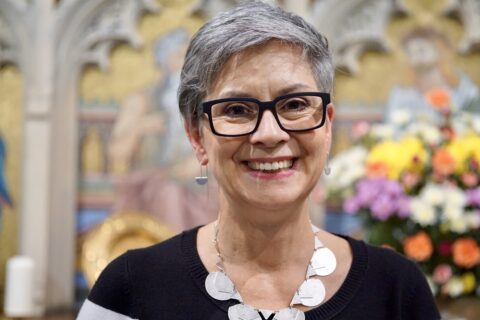 Gretta Vosper led two weekend conferences in England this month, one in Leeds facilitated by PCN Britain and one in Birmingham, run by Carrs Lane Church. Andy Vivian attended the Birmingham event and writes about some of the insights from the conference that have stuck with him.

Four years ago, Gretta Vosper identified herself with atheism, a move she has since had good reason to regret since it attracted a host of enemies who have done their best to have her banned from ministry. At the time it was an act of solidarity with friends in Muslim countries who were being persecuted for their atheism. But the atheist label carries a load of negative assumptions which she has found difficult to live down.

Gretta says her non-theist approach to religion was gleaned in Sunday School at the United Church of Canada. This was in the sixties, shortly after the publication of Honest to God. “I was taught that our love and compassion bring God into being in our world”. So when people ask Gretta, ‘When did you lose your faith”; she replies, “Never, I simply decided I needed to find other words to talk about it”.

The language of our hymns, confessions and supplications is heavily reliant on images of a supernatural, interventionist God who hears our prayers, who has a view on our behaviour, takes action to influence events and outcomes, and saves us from damnation. Most church-attending progressive Christians are content to put up with the disconnect between what is sung or recited and what they actually believe. It is a price we pay in order to remain part of communities we have grown to love. But Vosper’s point is that this traditional vocabulary is not an innocent relic. It positively alienates vast numbers of people with whom we could be collaborating to make the world a better place. By aligning ourselves with a supernatural moral authority called God we are inevitably seen to be claiming some kind of superiority for ourselves.

The most interesting thing about West Hill Church in Toronto, where Gretta is minister, is their attempt to eliminate all elements of worship that come loaded with metaphysical baggage – no promises of salvation through belief in the cross, no deification of a man called Jesus, no promises of healing, no validation of supernatural events reported in the Bible – eg walking on water – and no use of the word God. As an attender, you’ll practice and uphold values such as compassion, justice, respect, accountability and forgiveness, but you’ll never do so through a mire of doctrinal language. On her website she and her husband, Scott Kearns, sell a number of volumes of prayers, poems and songs, in which God language and supernatural agency are absent.

So should we see Gretta as a leader within the Spiritual but Not Religious movement? She is not comfortable with the word spiritual. It often carries overtones of otherworldly power, which she doesn’t believe in. And those of us who describe ourselves as spiritual seekers often end up focused on making ourselves feel good rather than connecting with others. She is happier with the word sacred, meaning something so important we can’t afford to lose it.

“My ground belief is there is a power which emerges from healthy and whole relationships. As we live in right relationship with ourselves, others and the world so we can draw on the power that brings. Over the centuries, our churches have called us time and again to find this right relationship. Relationships are the essence of what it means to be a human”.

It occurs to me that to talk of a power that you can draw on in this way might be a reason to go on using the word God - in a non-supernatural sense. In the context of our conference, Gretta was happy to redefine the word God in that way, but she doesn’t think that is particularly useful. The word God already has centuries of meaning as a supernatural and all-powerful Being, so it will always take a lengthy explanation to refine that meaning to the casual listener. To what purpose? It strikes her as a form of theological ‘masturbation’ designed to make us feel good about using the word while obscuring the underlying point that religion is about ‘a rare and beautiful connection and commitment between people’.

Gretta then turned our thoughts to the kind of church we want for the future. Her message was “Don’t ignore the ‘Nones’”. The Nones are those who tick the ‘None’ box on surveys about religious affiliation. In the case of the UK these constitute more than half the population. Contrary to the prejudices of some Christians, the Nones are not all self-seeking hedonists whose only sacred activity is shopping. Just as much as the rest of us they are likely to own a set of core values. What they often lack is a community that will encourage and stretch them to live out their values and be the best they can be. Gretta believes it is the job of churches to invite the Nones out of isolation and to help them to express their needs and to live up to their values. Such is the toxic reputation of religion that only a church which does not require you to believe in a supernatural God is going to get connect with the Nones.

But Gretta goes a step further. Our purpose, she says, is not to save the church but to create the kind of community that the Nones might find helpful. She has recently helped to plant a new Oasis Community in Toronto. The Oasis Network started in Houston when 200 people responded to an invitation to attend a gathering of non-believers who were interested in forming a secular alternative to a faith-based community. Their first core value is that “People Are More Important than Beliefs”. On their website you will find these words: “Our mission is to create a community for the good of humanity. Gatherings feature live performances by local musicians, speakers to inspire and educate, and children's programming to entertain and stimulate young minds.”

Oasis is only available in North America. Here in the UK there is something very similar, started in 2013, called the Sunday Assembly. There are 35 SA meetings in the UK and it is spreading worldwide. As their founders put it, “Life is short, it is brilliant, it is sometimes tough; we build communities that help everyone live life as fully as possible.” Gretta also recommended a podcast called Nomad. It is produced in the UK, and now enjoys a worldwide audience of 90,000. As the presenters say on their website, “Join two ordinary pilgrims as they stumble through the post-Christendom wilderness, looking for signs of hope.”

Gretta’s parting words encouraged us to think about seeding a secular community.

“Put up a sign which says ‘Sunday 3pm. A gathering for people who don’t believe’. Advertise it through the Nomad podcast if they are willing. Start with the four principles of the Oasis Network (http://www.peoplearemoreimportant.org/about-oasis/) . Then stand back and let those attending decide what happens next.”