“Making Meaning in a Meaningless Universe” - Holloway resigned his bishopric in 2000, declaring himself an “after religious” 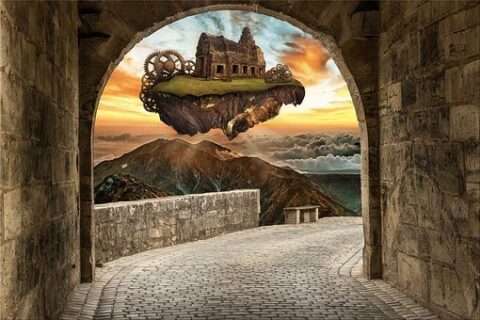 Stories We Tell Ourselves RICHARD HOLLOWAY Reading this wise, witty and provocative book, I was haunted by a poem: seventeenth-century Welsh poet and doctor Henry Vaughan’s “Vanity of Spirit”. It begins with a hermit/philosopher, “quite spent with thoughts”, deciding to leave his cell for a bit of fresh air and lie down beside a small spring of water. Here he examines the natural world to see if he can get any of the great answers. He can’t, but “having pass’d / Through all the creatures came at last / To search myself, where I did find / Traces and sounds of a strange kind”. Richard Holloway, former Bishop of Edinburgh and Primus of the Scottish Episcopal Church, is on the same journey in his latest book. Its subtitle is “Making Meaning in a Meaningless Universe”. And his path is shaped by examining the stories humans have told and tell themselves to find that meaning. Religious, mystical, scientific, psychological. When Holloway resigned his bishopric in 2000, declaring himself an “after religious”, and putting his hope squarely in humanity, he did not give up that search for meaning, in and beyond the world, which had presumably once driven his faith. In 2004 he wrote a book called Looking in the Distance: The Human Search For Meaning. In this second exploration he’s not looking in the distance any more but, like Henry Vaughan, deep inside himself and others. The book ends with his own “story”, but on the way we meet the narratives and the problems that have dogged us since we began to talk, think and write: suffering, pain, doubt, inequality, the foolishness of fundamentalism, man’s capacity for cruelty. Holloway is clear-sighted about all these, and quite rightly ticks off Christian liberals like me who attack, sometimes rather smugly, the atheist camp. Among the sources he cites is the philosopher William James’ Varieties of Religious Experience, the book that came out of his 1901 Gifford Lectures. James, an unbeliever, is discussing the “potential forms of consciousness” that might lie beyond normal waking consciousness. “No account of the universe in its totality can be final,” he writes, “which leaves these other forms of consciousness quite disregarded … At any rate they forbid a premature closing of our accounts with reality.” This is such an important statement: the temptation to close down our exploration of why and how we live because of the demands of the materialist world, and the failure of so many answers we used to rely on, must be resisted. Not by retreating into old simplicities or sacrificing our humanity, but by doing what Holloway does here, taking a larger view and deeper look at how we have answered these questions in the past and continue to do so. We live, as W.H. Auden points out in his famous poem “September 1, 1939”, “lost in a haunted wood”, and the ghosts are important. Our journey should perhaps begin there, as Holloway’s does, taking us through what we know about the universe, the biblical and scientific accounts of Creation, the insights of mystical religion, and the challenges presented to faith and reason by experience. And it’s a journey that should be shared, by believers and unbelievers. About time we stopped shouting at each other over the barricades. Holloway’s heroes are the “grown-ups”: Primo Levi, chemist and humanist; Dietrich Bonhoeffer, Protestant martyr under the Nazis, who wrote – in the shadow of the gallows – “Before God and with God we live without God”; Joan Didion, novelist and essayist, who rejects the comfort of the stories told to her as a child and young adult; the philosopher Jonathan Rée, who sets out to free philosophy from self-referential point-scoring and change it from a “museum” into a “carnival”, and another martyr – Catholic this time – the Franciscan friar Maximilian Kolbe, who gave up his life in Auschwitz for another prisoner. One “hero” you cannot remove from the mix is Jesus himself, with his radical new Gospel and, particularly in the Beatitudes, his reversal of the values that have largely powered the Old Testament. The cleansing power of forgiveness has entered the argument forever and moves all of us who struggle for answers. Here Holloway and “the Faithful” will find themselves completely in step. Sometimes, in his search for clarity and honesty, though, I find him oversimplifying: for example I cannot believe, as Holloway suggests, that the biblical account of Creation began quite casually as a late-night yarn round the fire, or that it is enough to stand at the side of the road of faith, looking both ways for ever. At some point, a Christian has to cross it. But this is an important book, for all of us who want to understand the world and each other. You put it down refreshed. Near the beginning, Richard Holloway quotes the famous passage from The Brothers Karamazov where Ivan Karamazov, talking to his devout brother, Alyosha, after making a study of the suffering of children, says, in spite of his desire for a religious answer to the question “what is it all for?”, that he cannot go on believing. “It’s not that I don’t accept God, Alyosha, I just most respectfully return him the ticket.” We come back full circle to this conversation in Richard Holloway’s final chapter. Whether or not this religious searcher will return his, I leave you to discover. (canongate, 272 PP, £16.99) Tablet bookshop price £15.29 • Tel 020 7799 4064