The book, Bleeding for Jesus, John Smyth and the cult of Iwerne camps (BFJ), which I received on Friday, has nothing resembling a good or tidy conclusion. 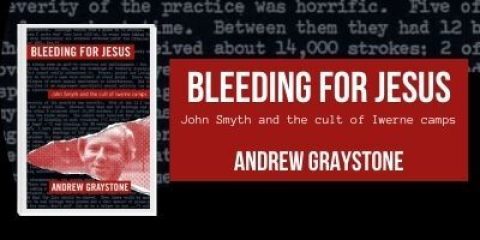 The book, Bleeding for Jesus, John Smyth and the cult of Iwerne camps (BFJ), which I received on Friday, has nothing resembling a good or tidy conclusion. There are indeed some good people scattered here and there in the narrative and these help to mitigate what is an appalling tale of cruelty, moral failure and indifference which fill the pages. The book by Andrew Graystone is one that shocks and depresses one at the same time. The only hero in the story is perhaps the author himself. Some in the story deserve our respect as innocent victims but only a small few deserve any admiration for their actions and Christian behaviour. Graystone’s narrative, in its clear simplicity, helps us to make sense of what is, much of the time, a total horror story. BFJ represents an extraordinary piece of research. The detail in it is mind blowing and, as far as one can tell, completely accurate. If there are errors, as some have already claimed, they do not detract from the main thrust of the book and its meticulous attention to detail. Graystone has evidently spoken to hundreds of people and mastered thousands of pages of documents. The work he has done is part of a wider but necessary movement to bring light into murky areas of Church safeguarding failures from the past.

The outline of the story of John Smyth and his nefarious behaviour towards a group of young privileged public-school boys in England is already well known. Graystone manages to provide a lot more detail through his patient questioning of witnesses who witnessed the events of 40 years ago and others more recent. The book well conveys the social and theological claustrophobia which have long been a feature of the Iwerne camps. Graystone has great sympathy and understanding for the emotional deprivation felt by many of the campers, educated in privileged schools. Smyth also well understood this vulnerability. This could lead to a desperate need in some boys, sundered apart from families at an early age, to have an understanding adult in their lives. Smyth offered himself to fit a paternal role for some of them. Using this position of proxy father, Smyth persuaded over 20 boys in England to undergo savage beatings at his home in Winchester. Somehow the pain of these beatings was thought to bring the recipient closer to a Father God. We are given a glimpse of a fundamentalist theology which could be so easily twisted to become toxic and suit Smyth’s nefarious purposes. The Iwerne theology taught to generations of its alumni, is also revealed to be, in fact, remarkably shallow and superficial.