Howard Grace writes about a gathering of 70 people from various faiths and backgrounds who met last May to discuss personal transformation, guided by the question, ‘How Do I Overcome?’ 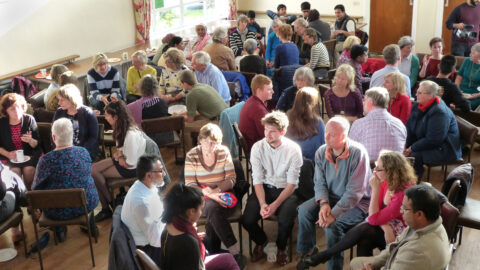 To set the scene we heard from several panellists. The first was Jo Berry whose father, Sir Antony Berry MP, was killed when the IRA blew up the Brighton Grand Hotel, during the Conservative party conference, thirty years ago. She has since been through a profound personal journey and works as a peacemaker with Pat Magee, the IRA man who planted the bomb. Her insights were particularly poignant in the week following Prince Charles shaking hands with Gerry Adams.

Jo described how it felt as if a part of her died in that bomb. She was totally out of her depth but somehow held on to a small hope that something positive would come out of the trauma. An inner shift in her was required to hear the story of the enemy. For her the question was about whether she could let go of her need to blame, and open her heart enough to hear Patrick’s story and understand his motivations. Doing this was a journey and a choice, which meant it wasn’t all sorted and put away in a box. Her journey has not been related to religion. She felt that on a deeper level it was a personal struggle that was common for all human beings. Perhaps more than anything she realised that no matter which side of the conflict you’re on, had we all lived each other’s lives, we could all have done what the other did.

Gill McConkey is an evangelical Christian. Gill was an unwanted baby, taken into Council care before being adopted. Her new parents were engaged in occult practices, and Gill was treated badly. Kind neighbours, belonging to the Salvation Army, took her to church, where she heard about God’s love for her shown in Jesus. She still had little personal experience of love, was a wild child and was expelled from secondary school. Very early in her married life Gill had a conversion experience, becoming a Christian. This led to a transformation of her life. She has two married daughters, has enjoyed a successful career as a nursery nurse, is an active member of her church and very involved in caring for others. Life still has it challenges, but it is Gill’s belief that the Holy Spirit of God strengthens and enables her to face all circumstances with an underlying sense of peace and joy.

The next speaker was Allama Musharraf Hussaini, a world known anchor person and orator from Ahle Bait TV UK who has been championing the cause of bringing Shia and Sunni Muslims together and working for harmony and reconciliation between different religions. He described his spiritual journey from being a young man who eventually became a Shia Muslim by choice rather than by birth. He then had laid on his heart the conviction to be a bridge builder, not only between Shia and Sunni Muslims but between all people, on a deeper level than beliefs. In doing this, like all bridge builders, as well as attracting support for his convictions he has also received opposition from some fellow Shia’s as well as Sunnis.

The final two speakers were Mukesh Bansal and Vinod Sharma. They reflected on the Hindu path to freedom from Worry, Sorrow, Fear and Resistance.

(1) If we live in the present we overcome worry from the unknown.

(2) If you take results of action as God’s verdict you will overcome sorrow and and return to a ‘Happy’ state.

(3) Fear is based on some myths or unknown causes. Believe in God to overcome fear.

(4) If you are persistent and clear on your objectives, you will overcome resistance and achieve goals.

This gathering caused me to reflect on what motivates us to go in a new direction in life. Is it our beliefs, experiences or something else? For instance, if, due to a belief in reincarnation, we think that as a consequence of living an immoral life we will appear as a worm in our next incarnation that might well make a positive impact on how we live in our present one. Another example is belief in the efficacy of a drug. Our health may be greatly enhanced by taking a tablet. This is usually due to a genuine medical process. But sometimes it is down to the placebo effect, the influence of mind over matter.

In the early 1980s I was a teacher of mathematics in a school in the UK. In one A-level class was a student who was a Jehovah’s Witness. After a few weeks this very pleasant young man decided to leave school and his studies because his religion had taught him that we were living in the ‘End Times’ and his life would be better used to go house to house to warn people about their impending doom - unless they adhered to the beliefs that he had. That was over 30 years ago, and I don’t know what he believes now.

A couple of years later I was one of a small group of UK teachers visiting China (before the big changes happened). We’d been invited to compare what motivates young people there with those of young people in the UK. One evening we had dinner with several local communist party officials. They raised the subject of religion being ‘The Opiate of The People’. I didn’t mention my student, but could understand their concern about the effect of some religious beliefs. However, they were intrigued by the fact that my Christian beliefs played a part in motivating me towards bringing change to what is wrong in society.

There are a multitude of examples where people’s actions and purpose are radically affected by their/our beliefs, for good or for ill. But what is really happening in this process? If a person experiences a religious transformation, what is causing that new inspiration? Is it the God that they come to believe in, or is it the belief that is at the root of the transformation? There is clearly something that is bringing that change. But is that something actually rooted in a different reality to any of our imaginings? Paul Tillich wrote about ‘The God who lives beyond the Gods of men and women.’ Some will say, “That is the God I worship anyway.” But is it? Others, because of misunderstandings and misuses in the past will not want to use the word ‘God’ for this ‘reality within and beyond’. But whatever it is let us explore a bit further.

Jo Berry told us, “I feel I’ve been recovering some of the humanity I lost when that bomb went off. Patrick is also on a journey to recover his humanity.” Their interpretation of what happened in their spirits is not a religious one or related to an orthodox perception of God. Yet they recognise the transforming process that was triggered by this experience of living into each other’s narratives. Other people are touched by music, a walk in the beauty of nature, or are stirred to action by seeing the plight of people in need. So experiences can also be pivotal in inspiring the process of positive transformation.

Having said this we also need to be aware that experiences sometimes have an opposite effect. The oppression or killing of loved ones often causes a spirit of hatred/anger/revenge. A heart of love can just as easily be transformed into a heart of stone.

But what of those who claim to have been motivated by an idea? Some ideas are helpful and inspiring. They lead humanity forward. Others are well intended but also contain fundamental seeds of division and conflict. For instance Communism was motivated by a desire to address the plight of poorer people. The focus on the class war, however, led to the death of tens of millions around the world. Some religions too have care and compassion as a primary message. But beliefs in exclusivity or domination often also lead to conflict alienation and atrocity. This can be seen contributing to the present so called Islamic State phenomenon.

My Palestinian friend Imad Karam says about the situation between his people and the Israelis, “We are both trapped in our own narratives.” How true that is of so many situations in the world, whether on a social, international, religious or personal level - such as between husbands and wives. In our discussion groups we were aware that it can make such a difference to live into each other’s narratives, like Jo Berry and Pat Magee have found. We also need to seek, and allow our hearts to expand to, a much larger all-inclusive narrative. Such a narrative needs to have compassion for everybody at the centre of it.

We have seen that people can be transformed by ideas or experiences. It is sometimes a matter of judgement whether the effects are seen as positive or negative. For instance, one person’s terrorist is another person’s freedom fighter. But on top of all these various factors there comes the issue of choice. Nelson Mandela had every reason to hate. Yet the path he chose to take has had a tremendous impact not only on the transformation of his own life, but also on that of his nation. We lesser mortals can also make a contribution to society and those around us, as well as to foster a change in direction of our own lives.

We may not change over-night but as long as the commitment is there, change will take place. However, we need to be conscious that it is not just down to us. There are a variety of factors at work. As theologian Marcus Borg observed, “Though we can’t make transformation happen, we can midwife the process.”

I’ll end with a comment from Finn Harald, a Swedish friend of mine.

“If we can see the religious beliefs as different frameworks for human experience rather than truths that divide us from each other humanity would take a step further. The task is to promote a process rather than promoting ideas. That provides a common ground where we can all meet as equals."

Howard Grace, The West Berkshire Peace and Integration Forum. The forum hosted the event described in this article. Howard is a PCN member and attends the Newbury PCN affiliated group.