Any Thought for the Day?

Humanists ask BBC to open up Radio 4’s Thought for the Day to non-religious voices. 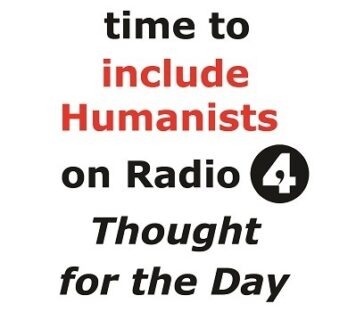 Harriet Sherwood, religion correspondent of The Guardian tweeted about a letter sent to the newspaper from prominent humanists who are making a fresh appeal to the BBC to open up Radio 4’s Thought for the Day to non-religious voices.

Amongst the signatories is the philosopher Julian Baggini, a guest of PCN at our conference in London next June, the comedian Ed Byrne, the human rights campaigner Peter Tatchell, the Labour MP Nick Brown and the Bake Off celebrity Sandi Toksvig.

They are among 33 patrons of the charity Humanists UK who have signed a letter calling on Tony Hall, the BBC’s director general, calling for the ban on humanists presenting Thought for the Day to be lifted.

The letter says: “Over half the British population do not belong to any religion and around a quarter have a humanist worldview. By barring humanists from Thought for the Day, the BBC is blatantly failing in its remit to reflect the diversity of beliefs of its audience and wider population, and its legal duty to treat non-religious and religious beliefs equally.” It adds: “To many, the exclusion of humanists from Thought for the Day sends a very clear message that humanists do not have as much to contribute as religious people to one of the BBC’s most high-profile ethical slots.”

Humanists UK has campaigned for 16 years to open Thought for the Day up to non-religious voices. Andrew Copson, the chief executive of Humanists UK, said the BBC had “blatant disregard” for non-religious people who wanted to contribute reflections but were barred from doing so.

“It is deeply concerning and frankly undemocratic that, despite decades of humanist and secular campaigning to reform Thought for the Day, the BBC still will not budge and instead continues to shut out our voices time and time again.” The majority of contributors to Thought for the Day are Christian, although there are regular Muslim and Jewish contributors and occasional Hindus, Sikhs and Buddhists.

A flurry of correspondence ensued, including this letter from Adrian, chair of PCN:

“Of course Thought for the Day (letters 13 Nov) should be open to humanists for their contribution to the stream of voices, religious and non-religious, commenting on the important ethical issues of our time. No religion or ideology has a monopoly on truth, no matter how loud the voices, how certain the viewpoints. Surely we should be looking beyond the divisions in an increasingly tribalistic world and see what is good and life affirming in all faith and non-faith traditions? Bring it on! Lets have some thoughts for each day which lift up our spirits to face whatever that day brings! “

What do PCN members think? Lets have your views!

Howard Jacobson would sooner see Radio 4's Thought for the Day more not less religious and argues that humanists and the religious can meet in sermonizing when it's of the majesty of a great preacher like John Donne.

"I fall to wondering what exactly non-religious needs are, and whether, by insisting on a distinction between the religious and the non-religious, humanists aren't making an unpardonably limiting assumption about both."