Theologian Val Webb reflects on her UK tour of PCN groups earlier this year. She warns the progressive movement against developing a new orthodoxy and to be respectful of those taking their first steps into progressive thinking. 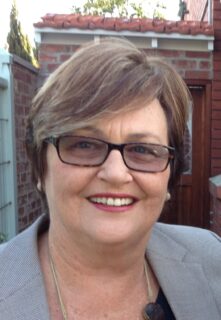 In April this year, I completed another "grand tour" of progressive groups in the UK. Maurice and I drove 2,800 miles, enjoying both the natural beauty of the countryside and the warmth of local hospitality. Of the ten places visited in twelve days (Stirling, Glasgow, Stockport, Sheffield, Albrighton, Tavistock, Truro, Newbury, Leicester and Welwyn Garden City), only two (Stockport and Sheffield) were groups I visited on my 2013 tour. I am forever impressed at the number of PCN groups across the UK and of the national organization that pulls them together with its website and events.

For this tour, I offered a choice of topics across the range of my books and the response was diverse. I was especially pleased to speak about my latest book - Testing Tradition and Liberating Theology: finding your own voice, released in the UK literally as I stepped on the plane from Australia to London! This new book was written because I meet so many people who think there is only one "truth", the same yesterday, today and forever, and either leave the church or accept with blind faith the "correct truth", even if it does not make sense to them. This book traces in lay friendly language the huge spectrum of thinking across Christianity over twenty centuries, constantly changing with new knowledge and different contexts.

In most places I visited, the PCN group was well established, but for some, this was a new experience and they were excited to discover, through local advertising, many other like-minded people who joined them for the event and will continue with them. Such new groups had both hope and enthusiasm and were relieved to know they are not alone in their doubts and questions. Stories emerged in such gatherings of people whose lives have been hurt by institutional churches and how PCN has become their life-blood. It was wonderful to walk into such settings with everything so well organized and be so welcomed.

Smaller groups were pleased that my tour included them - most overseas people come just to major locations. As one minister said, "We have met Marcus Borg, Bishop Spong and others through videos and books. It is nice to meet someone in the flesh". The opposite was also true - it was wonderful for me to meet so many people in different places who struggle with the same questions and are moving towards new ways of thinking. Many clergy and lay leaders were encouraged to be affirmed by a voice from elsewhere. Progressive leadership can be a hard and lonely road if opposition outstrips affirmation; and progressive thinking is also hard for laity if they are opposed by their church leadership. As biblical scholar Elisabeth Schussler Fiorenza says when asked why she stays in the Catholic church which has been so negative towards women, "I will not walk away and leave the naming of God to others who will name it against women".

Almost all the groups visited were affiliated in some way with local churches with some members very involved in church leadership, while other groups functioned on the fringes. Many denominations were represented - we met in United Reformed Churches, Church of England, Methodist and Baptist churches and Quaker meeting houses. Some people travelled great distances to be present, one older woman catching the 11pm train alone for her hour's journey home. I find older women in particular enthused by such meetings and the permission to say what has been in their hearts for years - women have not always been in places of power in religious institutions from which they can speak easily.

Some attendees had suffered persecution in their churches, whether from their ethnicity or sexual orientation or because of their challenges to traditional doctrines. As churches haemorrhage members, a fortress mentality often takes hold, as if enforcing "correct" doctrine will swell numbers, rather than being open to new ways of thinking for the twenty-first century. Many churches are dealing with massive expenses to keep crumbling church buildings intact and do not want to disturb traditional givers by challenging the "ever-true old, old story". One clergy said he had trouble getting lay people interested in theological questions but, from my experience, laity have suffered for so long being told not to ask questions that many have given up asking. They have internalized that their questions are wrong and will need encouragement to recover from such oppression. My new book Testing Tradition and Liberating Theology: Finding your own voice challenges laity to do their own theology and take responsibility for finding a theology that fits their context and experience.

Many familiar questions emerged: How do you talk to a conservative-fundamentalist relative or friend? Should we even worry about theology and just get on with doing? How do you build hospitable communities when people differ so strongly on theology? How do we get young people into the church, or maybe, how do we get out into the community where they are? How can science and religion talk together? Why do American style mega-churches attract young people? Why are pew-sitters not exposed to the new scholarship taught in seminaries? What progressive Sunday school material is available and what can we tell our grandchildren? What about the creeds? What is prayer to a non-theistic God?

I always encounter great ideas and creativity expressed in different communities. I met street pastors who work from 10pm until 4am, helping young women get home or finding their friends if they have drunk too much and need help. One group developed a monthly get together in a home, not "religious" as such, but each person bringing something to share around a theme, ethical or literary, that created stimulating discussion about life matters. Other groups had well developed lecture series that attracted an audience far beyond the church. For some, attracting new church members took second place to being a presence in the wider world.

In many progressive movements globally, there is a diversity of theological positions. "Progressive" tends to reflect more the walking away from, or challenging of, tradition, freeing people to ask questions and think for themselves, rather than developing some new, homogenous theological statement. I do not see this as a problem but rather representing freedom for people to take their faith in a direction relevant and transforming for them. The problem emerges, however, when such diverse expressions gathered under the one umbrella demand a new "orthodoxy". Any theology is about language and metaphor and we will always struggle with meaning and interpretation. Some progressives are calling themselves "atheists" today, which raises the question "What do you mean by atheist?" For some, it means the rejection of an all-powerful, all-knowing Being that controls both the universe and individual fate. They have moved to the language of panentheism which sees God as energy life-force or love in the universe, affecting and affected by the choices humans make. Traditionally, however, the term "atheist" means a rejection of anything that might be termed God, a certainty I personally find difficult given ever-expanding knowledge about our amazing universe and the inability for our minds to encompass it all - even scientists admit their inadequacy and resort to mystery and wonder at the unknown.

We need to be respectful in the progressive movement so that those taking first steps into progressive thinking are not confronted by positions totally alien to their previous mainline experience - small steps are required rather than the arrogance of yet another certainty, albeit progressive certainty. We need to stay open to all ideas and be on the journey together. If this seems like my broken record, it is a record worth playing!

As I said in my 2013 report, the UK organization is different from the Australian organization. We do not have a national organization of regional groups as such. Each state has its own progressive movement with groups meeting mostly in the capital cities. I think a national organization is something we need to develop, encouraging more smaller groups through country areas. We do, however, have a wonderful three yearly national event, Common Dreams, a conference featuring one or two overseas speakers and many of our own speakers. Australia has an impressive line-up of progressive authors published by international publishing houses and also Morning Star Publishing (www.morningstarpublishing.net.au), an Australian publishing company committed to making serious theology available for Australia's small market.

Thank you, PCN Britain for a wonderful experience. Special thanks to Robin Story who, once again, planned a perfect tour with great efficiency, grace and support! He made it all so easy for us! I have been invited back in 2017 so please be in touch with PCN Britain to have me visit - I look forward to meeting even more of you!