After Brexit - Can we find a broad and middle way?

As the UK faces an uncertain future, and its two major political parties hold internal contests for their leadership, a senior Anglican professor claims that the need for a new, progressive social-democratic political party ‘has never been more urgent’. 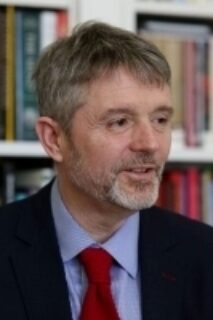 The Very Revd Prof Martyn Percy, Dean of Christ Church Cathedral, Oxford, has made the claim in an article published on the website of Modern Church, a society promoting liberal Christianity, of which he is a Vice President.

In the essay, called After Brexit - Can we find a broad and middle way?, Prof Percy notes the absence from the debate preceding the EU Referendum of words such as ‘community’ and ‘union’:

‘We seem to have gone out of our way to make a virtue out of being un-neigbourly; told ourselves that sharing - giving and receiving - is risky. We are better off on our own (or better off with just a very few friends) and if we can’t control the numbers at the table, perhaps the answer is not to feast at all.’

He contrasts this with the community of early Christians, who:

‘looked after the widows, orphans and poor, and treated them not as objects of charity, but as their equals. They did this to foreigners, friends, neighbours, slaves, free, male, female, young and old.’

Despite its flaws, he considers the modern European Union to be a profoundly ‘Christian project’, tracing its roots to the medieval Holy Roman Empire. Just as the church has always been there for others, he argues that Europe

‘is a shared enterprise, built on profound notions of charity, reciprocity, giving, receiving and grace.’

The problem with the EU Referendum lay in the ‘dangerous, divisive and toxic’ debate – the antithesis of these shared ideals:

‘The EU Referendum has not ended a process - rather, it has opened a deep wound in the body politic and in our society, and it will take considerable energies to bring about processes of healing and reconciliation. If we fail to see the enormity of the task, the wound will simply fester; the pain and potential for political poison will only spread, going deeper.’

To overcome this, Professor Percy calls for:

He draws on developments in the Church of England over the last fifty years as a parallel for what good government could look like at this critical time for the future of our country and our continent.

Since the 1960s, he argues, the Church of England has allowed ‘reactive conservative forces’ to ‘emasculate’ intelligent public and political theology:

‘Those who have advocated breadth, openness, comprehensiveness and charity have been relentlessly labelled and lambasted as ‘liberal’ - demonised, and then marginalised. The result in the church has been the collapse of the broad centre, and the rise of self-righteous sectarianism. What the church has done with itself, society is now seeing writ large.’

His alternative vision is of a ‘broad, social-progressive political party’ that is true to the original spirit of both the Liberal and Labour movements:

‘It would need to be authentically rooted in modern, progressive socialism, and equally true to modern, progressive, democratic liberal values. Only a broad, social-progressive political party can hold together a nation that is irreversibly multi-ethnic, multi-national and broad.’

He suggests that, just as the European project can be seen to have broadly Christian foundations, so this new party may require ‘a thoroughly ecumenical spirit’ and ‘broad and wholesome’ Christian foundations - pro-European, inclusive and diverse, a viable alternative to divisive appeals to traditionalism and conservatism.

The churches may have a role to play in forming this new political movement, through a ‘pan-denominational ecumenical appeal to political leaders’ to make a future in which we all want to play our part.

‘We undoubtedly need a new leadership to shape the broad politics and a broad church for our multi-ethnic, multi-faith, multi-national society. And not merely a society that is fit for purpose; but one that is full of purpose, and fit to serve all the people.’

To read and download the full 3000 word essay, After Brexit - Can we find a broad and middle way?, by Very Revd Prof Martyn Percy, visit the Modern Church website and click the link at the bottom of the page.