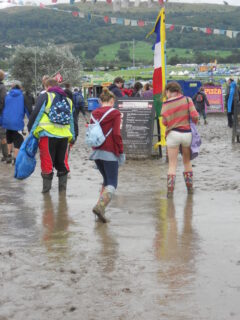 ​This was PCN’s third year of exhibiting at Greenbelt. We were part of a progressive quartet in which the other partners were Inclusive Church, St Mark’s Centre for Radical Christianity and Modern Church. That teamwork was symbolised by an enormous banner which brought together the four logos in a graphic showing a diverse urban street scene. Thirteen PCN members took turns to help at our stall. Andrew Burrell, our treasurer, revealed a talent for leading community singing when we joined forces with St Mark’s CRC for a presentation on the stage of the G-Source tent. Adrian Alker was the compare, authors Dave Tomlinson and John Simmonds provided the progressive message while PCN trustees Sonya Brown, Ali Morley and Alan Race provided the laughs as they challenged the audience to spot the lies in a game of theological Call My Bluff. Sonya is clearly a front runner to take over where Cilla Black left off should ITV ever bring back Blind Date.

It is two years since I attended Greenbelt and I noticed a new tone to conversations at the PCN stall. More people had heard of us. There also seemed to be a broader acceptance of the idea that traditional paradigms could and should be challenged. Many of the people who came to the stall already identified with progressive Christianity and were not concerned at the prospect of attracting disapproval from traditional church leaders. Of those who approached our stall, three groups were involved in forming new churches, two in London, one in Worcester. In one case, they had started off as a discussion group and worked round to the point where they wanted to “put things into practice”. They were looking for an organisation to which they could affiliate. I found myself wondering if these enquiries represent an entirely new constituency for PCN and what questions this might raise about how we plan for the future. Which brings me to a Greenbelt talk that I think will stay on me. George Elerick describes himself as part of the “emerging church”. The Greenbelt guide calls him a cultural theorist. His talk was entitled, “Domesticating Monsters: Why the Church Doesn’t Need Missions”. Elerick argues that conversion is a form of violence, depriving the convert of his “otherness” in order that the converter can feel good about himself. People with a mission are consuming the identities of those they seek to help. The relationship is built on an assumption of superiority and inferiority. This, Elerick said, was not the way of Jesus. The love shown by Jesus involves an emptying of self, (“an annihilation of the ego”), so that the other person’s right to their otherness is the starting point. The only violence should be against ourselves, our egos. “We take up our cross and follow Jesus”. I think it may take me some time to unpack this, let alone to follow through its implications.