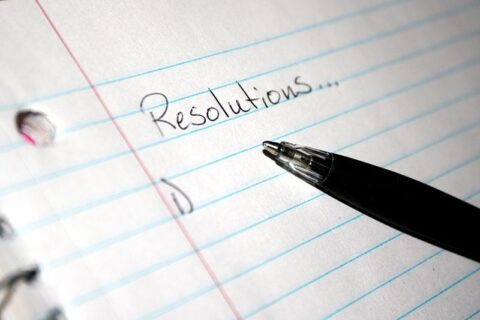 My usual New Year resolutions are goofy; put my belt through all the loops, remember where I park my car. But this year, I have come out of a prolonged and painful wilderness experience. I have recovered a neglected lesson from my past to approach and find resolution for the New Year.

​My recent thoughts about New Year started with my eye operation and improved vision. Enlightenment traditionally means letting in metaphoric new light. With any aha! realization the scales fall from our eyes to reveal a hidden truth. Closed eyes (minds) see no light; squinty eyes (minds) see distorted views; only open eyes (minds) let in all the light and see clearly. You can “see” where my thinking led me.

But then I thought about other “eyes”, and what they let in or close out. The heart, for example is like an eye that recognizes and receives or excludes emotions. Open hearts welcome a full spectrum of emotions (sad, mad, glad, afraid); squinty hearts become restrictive, while closed hearts are hard as iron. And what about our psyches/souls/spirits—the deep heart’s core? Do we close off our most profound parts to keep out abiding truths? Evade inconvenient wisdom? Avoid change, growth, and maturation? And if we do, what does it matter? And how can we remember all that while dancing the night away?

In the 1980’s I became a Child Protective Investigator and realized that I manifest behavioral indicators of someone who had been badly abused. My life was a mess, so I began exploring what had happened to me in childhood and how it had affected me. I also started a deeper search into spirituality. I attended various churches, went to meetings, and read widely. One book that I bought was called Zen and Zen Classics, by R.H. Blyth. In it I came across this opening line of a poem: “There is nothing difficult about the great way, but avoid preferences”. I was stunned. My whole life depended on clear and uninhibited demonstrations of my hard-hitting, closed preferences. I didn’t trust any of that absurd line!

The line opens the The HsinHsinming (Shinjinmei), which is the oldest extant Zen poem. I tried to read past the first idea, but was stuck in incredulous disbelief that such a preposterous notion was the way to enlightenment! But my life was in such a chaos of mistaken preferences that I decided I would live as if the Zen maxim was true. It took me several days before I chanced the first scary risk of letting go one of my sacred preferences. Since then, I have slowly found my way toward more openness that gradually, hesitantly, unevenly brought me toward 2013.

It took two years for me to read all the The HsinHsinming’s. Then, to help with its enigmas I read and meditated on different translations and more texts. But the basic message remains; reduce picking and choosing! When I remember to stop being so picky, my life improves.

So let’s lean toward a more enlightened 2013, with minds, hearts and spirits a little more open; less picky.